Climate-Justice Stories Are in Every Community, Waiting to Be Told

The poor and people of color in the US and around the world suffer first and worst from climate-driven catastrophes. Most news organizations have not told their stories. 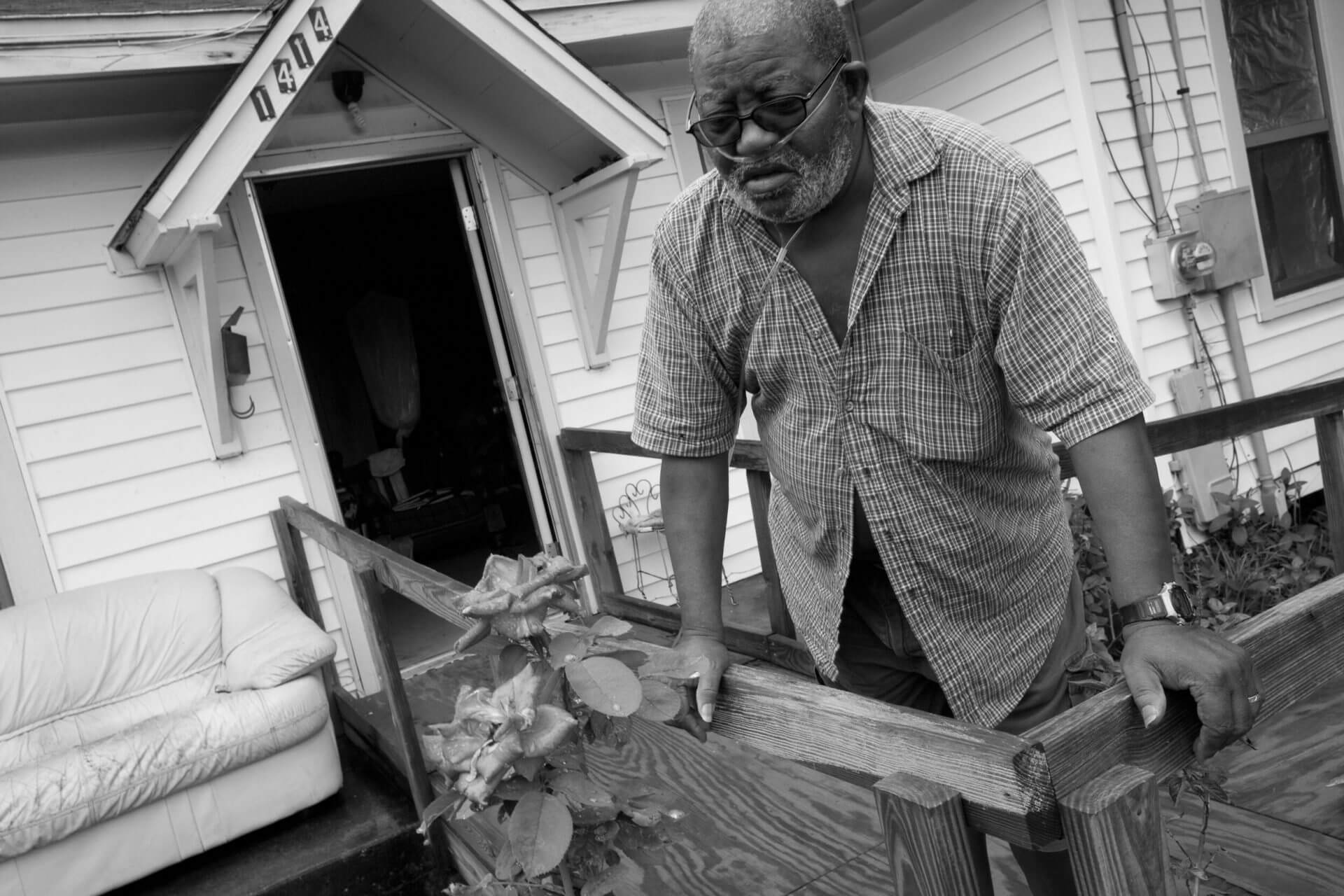 Horace Smith outside his home in Corpus Christi Texas. Horace has severe respiratory problems and must has oxygen 24-7. His house is next to two large oil refineries. (Photo: Peter Essick / Aurora Photos)

“Every city has its George Floyd,” Rev. Jesse Jackson said after attending Floyd’s June 4 funeral service in Minneapolis. No stranger to white supremacist violence, Jackson was 26 when he witnessed the assassination of civil rights leader Dr. Martin Luther King on a motel balcony in Memphis. The murder of Floyd, Jackson added, “photographed by a terrified and courageous 17-year-old girl, has made it impossible to ignore police violence against Black people.”

Indeed, the media has taken notice. But police brutality is not the only violence Black Americans and other communities of color must endure. It is factually indisputable that the poor and people of color in the US and around the world suffer first and worst from climate-driven catastrophes such as Hurricane Katrina, whose fifteenth anniversary comes in August. The same is true of standard air and water pollution, such as the lead-laden drinking water provided to residents in Flint, Michigan, the majority of whom are Black. But only rarely does mainstream news coverage make the point that such environmental violence is pervasive, chronic, and carries a clear racial and economic bias.

“There’s an [environmental justice] story in virtually every neighborhood that feels on a par with Flint, Michigan,” Varshini Prakash, the executive director of the youth climate group the Sunrise Movement, told journalists at a recent Covering Climate Now “Talking Shop” webinar. Born in the US and of Indian descent, the 27-year-old Prakash recognized as a teenager that “people around the world, many who looked like me, didn’t have water” or other basic necessities. Her family’s ancestral home in southern India was near a village “where Coca-Cola used up all the drinking water … and [was] selling farmers fertilizer that was actually chemical sludge.” Go to Louisiana’s “Cancer Alley,” she urged the journalists—referring to the 85 miles of land straddling the Mississippi River, north of New Orleans, where petrochemical plants occupy former slave plantations—and once again it’s the poor and people of color who are left to cope with horrific pollution.

The environmental justice story has long been sitting there, waiting to be told. But most news organizations have missed it, devoting what little climate coverage they do primarily to the words and deeds of scientists, politicians, and activists, who are often white and well-off, and focusing on such abstract concepts as parts per million of carbon dioxide, instead of the tangible human tragedies climate change is already wreaking in some communities.

“If you’re not getting into the context of who is being affected by [climate change], then you’re not telling the real climate story,” Kendra Pierre-Louis, a veteran climate change reporter, most recently for the New York Times, told journalists during the Talking Shop event. “It’s almost like journalistic negligence, because you’re speaking in highly technical terms, when the whole reason you’re reporting on [climate change] is because it has implications for society and humans. And you’re leaving that part of the story out.”

Recent days have brought some stellar exceptions to the rule, however. The Times interviewed leading Black environmentalists about climate change and concluded that racism “makes it impossible to live sustainably.” After describing how Hurricane Harvey, in 2016, wrecked a modest family home near a Texas oil refinery, CNN asked “whether fossil fuel companies … should help cover the tab” by compensating homeowners whose lives are upended by climate disasters. And CBS News interviewed one of the pioneers of environmental justice activism, Peggy Shepard, a co-founder of the Harlem-based WE ACT for Environmental Justice, who described how mainstream green groups and environmental justice organizations are now collaborating on an “Equitable and Just National Climate Platform.”

Sometimes, coverage can wrongly imply that racial and economic injustice is only an occasional aspect of the climate story. Too many newsrooms feel like, “‘Oh, we’ve done the ecojustice story for this year, we can move on,’” Pierre-Louis said. “[But ecojustice] is something that needs to be embedded in all aspects of climate reporting, and climate change needs to be embedded in all aspects of other reporting. If you’re an energy reporter and you’re reporting on Exxon’s quarterly earnings and you’re not mentioning climate change, that’s gross negligence.”

Reporting on climate injustice strikes some editors as improperly activist. Yessenia Funes, of Earther, attributed this view in part to the lack of racial diversity at many newsrooms. “I’ve been lucky to work at news organizations that center environmental justice,” said Funes. “It’s really unfortunate that some newsrooms create obstacles for reporters to pursue these types of stories,” she added. “I think that is often a result of reporters or editors who don’t have a clear understanding of the climate crisis and, more importantly, the inequity that’s baked into the climate crisis.” The solution is pretty simple, she said: “Just hire more people of color. I don’t understand why that’s such a difficult thing for news organizations to do.”

Further, news organizations must regard diversity as more than a bureaucratic box to be checked, when it’s actually an editorial outlook  to be embraced, Pierre-Louis, who is Black, said. “You want to hire people who look like me but think like you,” she once told a newsroom executive.

“Racism isn’t getting worse, it’s getting filmed,” actor Will Smith observed in 2016. Smith’s comment resurfaced on social media after the video of George Floyd’s murder sparked unprecedented worldwide protests. Environmental injustices still aren’t getting filmed very much, which means that the general public isn’t aware of what’s happening. Scientists project that this summer will bring “one of the most active” hurricane seasons ever to the Atlantic and Gulf coasts and extreme heat to many parts of the world. For unfortunate reasons, then, newsrooms might soon have ample opportunities to do better.

Now, here’s your weekly sampling of the latest in climate news, from across the Covering Climate Now collaboration.  ALL are available for republication by CCNow partners.*