Amid record-breaking temperatures in the Arctic and a storm season that is forecast to be especially active, our next “Talking Shop” will focus on summer weather reporting. 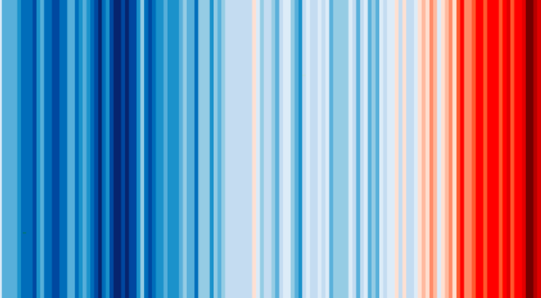 Last week, hundreds of meteorologists and climate scientists around the world united to send a message about climate change. Under the “#ShowYourStripes” campaign, meteorologists used a simple blue-and-red striped pattern, designed by UK-climate scientist Ed Hawkins, to demonstrate global temperature rise over the years. Many made their points with pins and by displaying the graphics on television and social media. Others went further, with building displays, custom face masks, custom ties, custom dresses, and even custom shower tiling.

Sadly, the campaign could not have come at a more appropriate time. Over the weekend, northern cities around the globe experienced staggering heat. One town in Siberia reached over 100 degrees Fahrenheit—32 degrees above normal highs for this time of year. And in the US on Friday, the warmest town in the country was in Maine. “The kind of weather we expect by 2100, 80 years early,” CBS News’s Jeff Berardelli wrote on Twitter, referring to forecasts of world temperatures should climate change continue unabated. Berardelli added: “For perspective, Miami has only reached 100 degrees once on record.”

Please keep an eye out in the coming days for an invitation to our next “Talking Shop” webinar on July 1. With our co-host, CCNow partner Climate Central, we’ll focus on covering extreme weather events—heat waves, droughts, wildfires, hurricanes, and more—through a climate lens. The storm season this year is forecast to be especially active, so unfortunately journalists will have no shortage of opportunities to make the climate connection clear to audiences. Our Talking Shop will convene meteorologists and other journalists to share the latest science and best practices for how to include it in your summer weather coverage and reporting.

Please also send any extreme weather-related stories that highlight the climate connection our way, now and throughout the storm season. As we’ve done in the past, we’ll bundle them and redistribute through our Sharing Library and in later Climate Beats. Stories to sharing@coveringclimatenow.org. More from us soon!