The World Is Burning, but the Political Press Insists on its Horserace

Audiences watched the most substantive conversation on climate change ever featured in a US presidential debate last week. You would never know it from the post-debate coverage.

By CCNow and Andrew McCormick 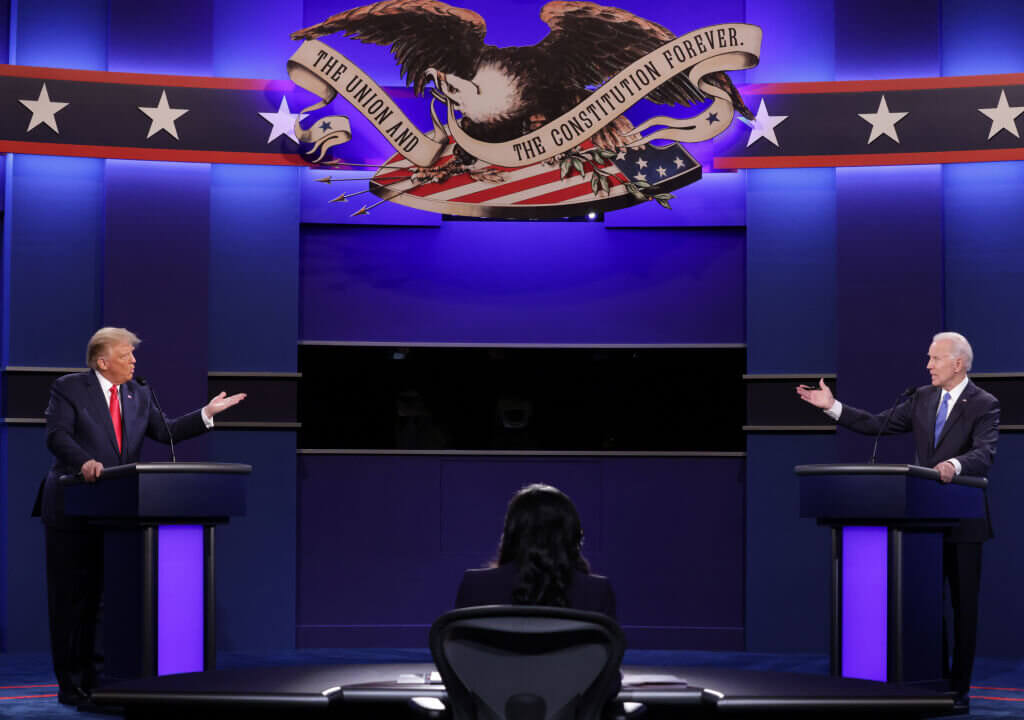 Last week, audiences watched the most substantive conversation on climate change to ever feature in a US presidential debate. Moderator Kristen Welker, of NBC News, first asked the candidates what each would do to combat climate change while also supporting job growth—a welcome improvement on questions in the first presidential debate and vice-presidential debate, which absurdly framed climate change as a matter of opinion. Welker followed up with a sharp question about the disproportionate levels of pollution experienced by communities of color, the first environmental justice question to ever appear in a general election debate.

In response, Trump repeated falsehoods he’s deployed in the past—asserting, for example, that wind power is “extremely expensive” and inflating the cost of Biden’s $2 trillion climate plan by a factor of fifty—while Biden called climate change an “existential threat to humanity” and detailed how he would invest public money to build a clean energy economy and create jobs. On Welker’s pollution question, Trump rejected the premise, saying incorrectly that the communities she mentioned are paid for their trouble; Biden, meanwhile, gave an informed description of the negative health outcomes that “fenceline” communities routinely face. Despite the uneven back-and-forth, it was a refreshing, all-too-rare moment in US media coverage of the climate story: nearly 12 minutes, in primetime, during which journalism treated climate change as a serious, multi-dimensional subject worthy of public discourse.

And then what did the political press do with this material in its follow-up coverage? Fumbled it, mostly.

Across the media, journalists fell back on horserace framing that ignored science and made faulty assumptions, focusing especially on Biden’s pledge to “transition from the oil industry” to renewable energy. Following Trump’s lead on stage, post-debate coverage portrayed Biden’s position as economically risky and a political liability. Welker’s own NBC News suggested Biden’s comments “could be costly in battleground states.” The Washington Post wondered “how politically damaging” Biden’s comments were; a second story called them “a debate-night stumble.” Even E&E News, an outlet which focuses exclusively on energy and the environment, asked, “Will Biden’s end-oil pledge work magic for Trump?”

Let’s get one thing straight: If humanity is to have any chance of avoiding the worst of climate change, America, like the rest of the world, must transition away from fossil fuels. That’s not politics—it’s science. The United Nations climate science panel says humanity needs to cut emissions in half by 2030, and reach net-zero emissions by 2050, to avoid catastrophic climate breakdown. Accordingly, a speedy transition away from fossil fuels has been central to all serious climate advocacy for years. Such a transition, via heavy investments in clean energy, is central to the climate plan Biden put forward in July.

And yet—science be damned—most news outlets fixated on the hay Republicans sought to make of the former vice president’s remarks. Journalists quoted liberally from dubious sources echoing Trump’s claim that Biden’s plan would tank the economy, when the plan in fact promises to create millions of jobs. At times, outlets lent further credibility to the attacks by dressing them up in their own strong language. (Conservatives, Politico wrote, were “accusing the Democratic nominee of being callous with the economy in his proposals for tackling climate change.”) Meanwhile, as climate journalist Emily Atkin observed in her newsletter Heated, the vast majority of coverage “[ignored] the fact that Trump doesn’t have a climate plan at all.” Of 30 stories that Atkin analyzed from mainstream outlets, all mentioned the potential consequences of strong climate action, but “only five discussed the cost of doing nothing.”

The coverage’s negative framing was also remarkably ill-informed about public opinion. Nearly 80 percent of Americans favor investments in alternative energy over fossil fuels, according to a 2020 poll by Pew Research, with two-thirds saying the government should do more to fight climate change. In Pennsylvania specifically, where pundits have centered the “post-debate political fallout” narrative, perspectives have shifted against fossil fuels. Recent polling shows residents overwhelmingly favor strong climate action; moreover, a slight majority opposes fracking, which Trump and many in the media have framed as a wedge issue in this election, despite Biden’s repeated insistence that he does not intend to end the practice.

Tellingly, it was climate reporters who cut through the political noise and leveled with their audiences on these matters. Referencing this year’s cascade of extreme weather events, Bill Weir, CNN’s chief climate correspondent, called out Trump’s “insistence that the US remain reliant on fossil fuels, despite the overwhelming evidence that the hell and high water of 2020 is just the beginning.” Alex Kaufman, at HuffPost, observed that “Trump’s ongoing push to deregulate the oil and gas industry has actually cost jobs in regions badly hit by the sudden plunge in oil prices at the start of the pandemic.” By overlooking facts like these, the political press instead gave the climate discussion over almost entirely to right-wing talking points.

For decades, the press’s greatest failure when it came to climate change—beyond its indefensible silence—was casting the story primarily as a matter of partisan politics, when in fact climate change is a science story with political implications. It’s clear many journalists have yet to kick the bad habit.

That’s a shame because, broadly speaking, mainstream coverage of the climate story has improved by leaps and bounds in recent years. Major outlets including The Washington Post, CNN, and Time have issued truly landmark pieces of climate reporting; The New York Times, Bloomberg, and, as of this month, The Atlantic, Der Spiegel, and El País have launched impressive new brands and climate sections; and we at Covering Climate Now, a global collaboration led by The Guardian, The Nation, and Columbia Journalism Review, have worked with hundreds of news organizations at every level of the industry to strengthen their coverage.

Time is short, however. This election, regardless of who wins, marks an opportunity for news outlets to recommit to the climate story, which will only become more important and all-encompassing in the years ahead. To get the story right, newsroom leaders must encourage their journalists—not just climate reporters but reporters on every beat, as well as assignment editors, headline writers, copy staffs, and social media teams—to deepen their understanding of the climate crisis and its solutions and incorporate that knowledge into every facet of their work.

In the few days that remain before the election and in the months that will follow, journalists must ask themselves if they’re truly conveying the gravity of the climate crisis to their audiences, as well as all the challenges and opportunities it entails. To do so means ditching the horserace obsession and catching up with the facts. It also means resisting partisan narratives and assumptions and insisting on the climate story as the matter of life and death it is. It’s increasingly evident what makes good climate coverage; the question, as ever, is whether journalists will deliver it.