Ahead of a storm season that is forecast to be especially active this summer both in the US and overseas, our latest “Talking Shop” brought together meteorologists and journalists to share best practices for reporting extreme weather events. 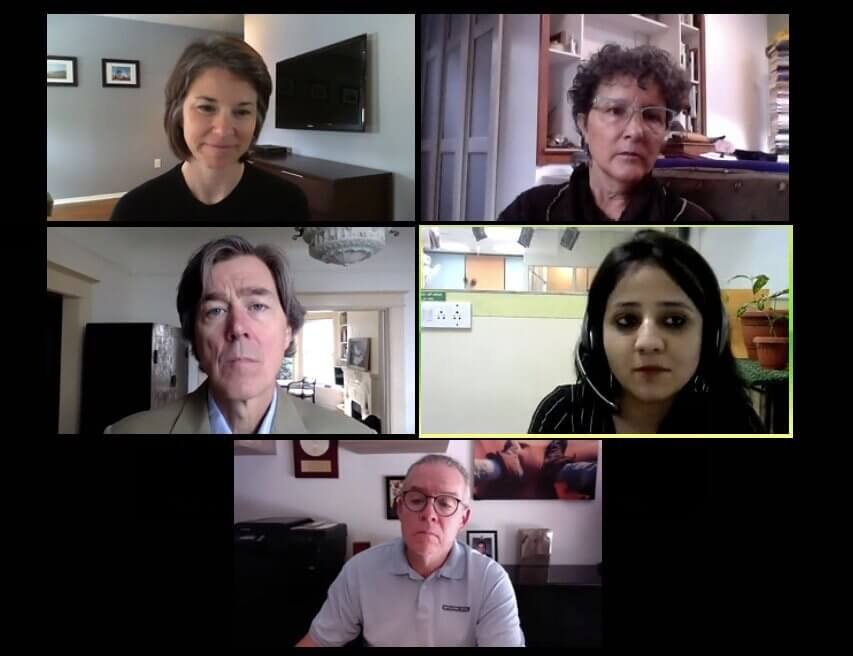 Ahead of a storm season that is forecast to be especially active this summer both in the US and overseas, our latest “Talking Shop” brought together meteorologists and journalists to share best practices for reporting extreme weather events.

Hertsgaard began the webinar by urging editors and journalists to include the climate context when reporting on extreme weather events. “Humans are changing the weather on this planet. If we leave that out of our reporting, then we’re missing the story and misleading our audiences,” he said. “And it’s our duty as journalists to bring it to the attention, not just of the public, but also of policymakers so that they can no longer engage in climate denial.”

Woods Placky added, “We know that climate change is making heat waves longer and stronger, hurricanes wetter and worse and wildfires larger and more damaging.” Including climate when reporting these stories is essential, she said, because it educates audiences on the “true risks” of worsening weather events and helps people prepare for the future. “Extreme weather is the primary way that people experience climate change. It reshapes landscapes and it reshapes lives,” she said.

Below are a few lightly edited highlights from our panelists:

“When I get on TV and make these connections between extreme weather events, and the changing climate, it’s not like I’m telling people, ‘Hey, this was caused by climate change.’ No, that’s not the way I do it. I simply say that this is consistent with what you would expect in a warming world,” Morales said. He cautioned that for a specific extreme weather event, such as a strong hurricane, it’s important to wait for scientists to confirm the climate connection. “You can definitely say it is consistent with what you would expect, but you can’t simply just make the direct connection without waiting for the attribution study.” – John Morales

“Intersectional reporting is an effective way of bringing in the human element to climate stories. So, the story does not have to be just about heat waves and the number of people dying. It can be about the impact of heat waves on the economy, on agriculture, or on public health,” Behl said. The best approach to climate reporting is to pitch hyper-local stories and explore human interest angles. Try to uncover hidden gems – sunshine stories of people and places that have managed to overcome the crisis, and have set an example.” – Manka Behl

“Sea level rise is particularly going to hit low income and minority neighborhoods, where the air pollution is already bad, and the housing is already difficult and poor,” Snow said. “The recent protests are all about asking for anti-racist work, racial equality and justice. Environmental justice is a huge part of climate change. There are plenty of Black people, Indigenous people and people of color who are fabulous scientists. Bring out their voices and put them on the air. It’s also an opportunity to spread the nut more widely in terms of our sourcing.” – Kat Snow

Watch the video above to learn more about how to best include the climate context in your weather-related stories and pitfalls to avoid; what new language and terminology newsrooms are adopting when describing the climate crisis; and how to broaden the scope of extreme-weather reporting with story ideas that will resonate with new audiences, such as those related to business, health, politics and justice.

A number of resources came up during the webinar, which we have included in our new Extreme Weather Reporting Guide. It also includes reporting tips, story ideas and summarizes how climate change affects various extreme weather events.