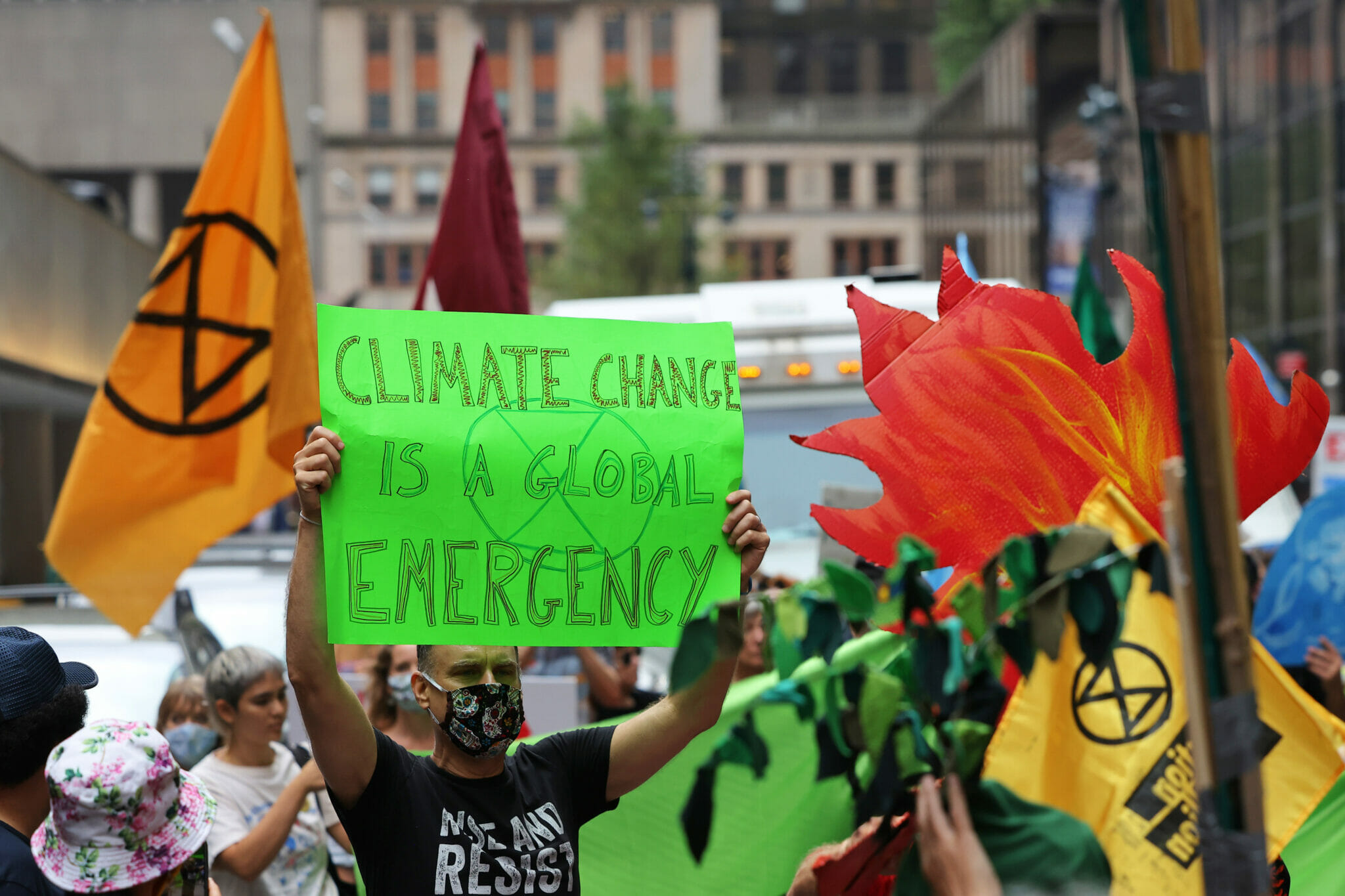 Extinction Rebellion NYC held a march and day of action on September 17, 2021 in New York City to bring attention to the effects of climate change ahead of the annual gathering of world leaders for United Nations General Assembly. (Photo by Michael M. Santiago/Getty Images)

If you’re covering climate change, history shows that one of the smartest things you can do is pay attention to activists. Time and again, they have inadvertently indicated where the climate story was heading — and thus what journalists had to be prepared to cover. Covering Climate Now has long argued that activists can be newsmakers and should be treated as such, just like the government and corporate officials we routinely quote. Recent events have provided fresh evidence for this proposition.

The US Inflation Reduction Act never would have passed if activists had not begun demanding a Green New Deal in 2018, pushing then-candidate Joe Biden to strengthen his climate commitments in 2020, and keeping pressure on Congress these past two years. This week, US congressional committees are investigating oil companies for spreading disinformation about climate change, an accusation activists began making decades ago. Next week, activists will join other elements of civil society at Climate Week NYC to prod world leaders to heed UN Secretary-General António Guterres’s demand to “lower the temperature — now,” by slashing heat-trapping emissions.

Of course, activists are not solely responsible for these and other examples of climate action; social change is the result of a variety of converging forces. Nor are activists always correct; journalists must apply the same critical scrutiny to their claims that we apply to all sources of information. But activism is an indispensable part of pushing society towards climate survival, and that makes activists newsworthy.

Activists also can provide journalists with valuable practical assistance, helping orient reporters who are assigned to an unfamiliar topic or place — a ready source of background information and useful contacts. Activism can also alert journalists when we’re missing the story. Three years ago, during Climate Week 2019, the estimated 6 million protestors Greta Thunberg and her fellow Fridays For Future activists led into the streets served as a wake-up call to newsrooms around the world that the time for downplaying the climate crisis was over.

And it is activists who, more than anyone, have put issues of justice at the center of the climate debate. That centering will enable more insightful coverage of the COP27 climate conference this November, where the horrors of Pakistan’s recent flooding will doubtless be invoked as Global South governments and activists demand compensation for the “loss and damage” they are suffering because of rich countries’ emissions.

As with everyone we cover, journalists must keep a certain distance from activists. We are not their cheerleaders; indeed, we must hold them to account, just as we hold politicians and CEOs to account. But as activists work to shift the big conversations we’re having as a society, it’s important that journalists pay attention to what they’re doing. It’s just good journalism.

Climate solutions. Solutions Journalism Network (SJN) is launching the Climate Beacon Newsroom Initiative in partnership with CCNow and Climate Central. The year-long program will bring together five US newsrooms to transform their climate coverage. Each newsroom will select a climate fellow to take part in SJN’s Train-the-Trainers program. Fellows and newsrooms will both receive stipends for their work. Apply by Oct. 10. Learn more.

Oui! A slew of French news organizations have signed a new 13-point climate media charter urging newsrooms “to step up our practices in order to fully address [the climate crisis] and what’s at stake.” Read the charter (in English).

Amazon ablaze. Ahead of Brazil’s October presidential elections, the Amazon is burning at a rate not seen in years, surpassing the number of fires in August 2019, when a criminal episode known as Fire Day led to over two thousand fires. Some suspect that illegal land grabbers are taking advantage of lax regulations under far-right President Jair Bolsonaro ahead of a possible change of power. Via Sumaúma…

Rising seas. A new report by the non-profit research group Climate Central finds that hundreds of thousands of homes and businesses across millions of acres along the coasts of Louisiana, Texans, North Carolina, and Florida could be lost or severely damaged by 2050. By William Brangham at the PBS NewsHour…

#UtilitiesKnew. Electric utilities knew as early as the 1960s that burning fossil fuels led to global warming, according to a new report. They collaborated with oil and gas companies to “promote doubt around climate change” for the sake of profits. By Zoya Teirstein for Grist…

Greenwashing. BP, ExxonMobil, Shell, Chevron, and TotalEnergies are each spending hundreds of millions of dollars to improve their climate image, but they’re investing a “relative pittance” on low-carbon or renewable energy activities. By Lauren Leffer for Gizmodo…

Turning point. Increasingly, rural Virginia is embracing the clean energy transition — further fueled by financial support through the IRA. ”I feel optimistic about the region for the first time in a long time,” said one rooftop solar company employee. By Nina Lakhani at the Guardian…

AFP journalist Marlowe Hood writes about covering climate for a global news agency for over a decade, including his “Oh Shit!” moment, and the personal and professional toll the reporting has taken on him.

‘Watching the world burn’… a personal meditation on the burden of #climate knowledge https://t.co/nzvMgdHgZW pic.twitter.com/S1gUyeJSR0

United in Science. A new multi-agency report coordinated by the World Meteorological Organization warns that the physical and socioeconomic impacts of climate will be increasingly devastating. “The answer lies in urgent climate action, yet we continue to feed our fossil fuel addiction and to compromise the livelihoods of future generations,” writes United Nations Secretary-General António Guterres in the report’s forward. Read the report.

Climate Slack. Journalist Rachel Glickhouse has started a Slack group for journalists covering drought in the Western US. Learn more.

Code for Africa will convene a panel on how environmental journalists are using technology to report on climate change in Africa. Sept. 21. RSVP.

Fridays for Future NYC will kick off a global climate strike in New York City on Sept. 23. Learn more.

The Environmental and Energy Study Institute will hold a press briefing on catalyzing climate action in US K-12 schools. Sept. 28. RSVP.

Jobs. The Guardian is recruiting a reporter, fossil fuels and climate. The Bureau of Investigative Journalism has a position open for an antimicrobial resistance reporter. Carbon Brief is looking to hire at least one journalist to help expand its coverage of food, land, nature, and climate. High Country News is recruiting a number of editorial interns and reporting fellows.

Grants. The National Press Foundation and the National Press Club Journalism Institute will jointly award up to $75,000 in grants to US-based journalists who plan to cover environmental justice. Sentient Media is looking to help 50 journalists covering environment and agriculture in the Midwest, offering training programs, mentorship, and a $10,000 fund for new reporting.