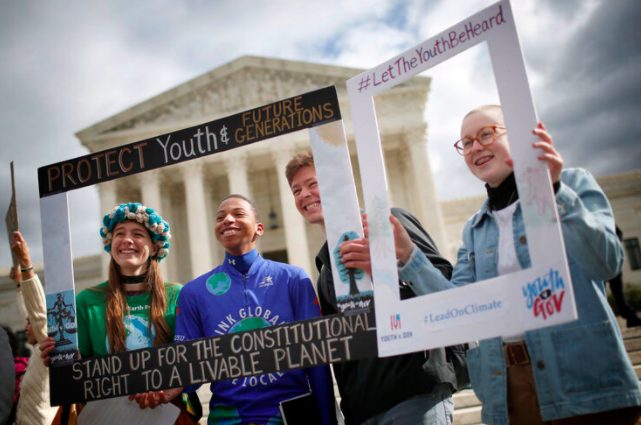 To kick off Covering Climate Now’s week of US elections coverage September 21 to 28, some of the world’s leading news organizations will share their platforms with the next generation of American voters and youth worldwide. The initiative will amplify the voices of first-time voters and other young people whose lives will be profoundly shaped by the climate crisis – and by how the next US president and Congress handle that crisis. Launch partners include The Guardian, VICE Media Group, NBC News and NowThis, along with Noticias Telemundo, Teen Vogue, Columbia Journalism Review, The Nation, Grist, WNET’s “Peril & Promise,” and WURD’s “ecoWURD,” with additional outlets being confirmed.

“Millions of young people have upended climate politics over the last year by protesting governments’ inaction and drawing connections to climate justice,” said Mekdela Maskal, the engagement editor of Covering Climate Now, a global consortium of 400-plus news outlets.  “Their passion and perspectives should directly inform news coverage in the lead-up to climate-critical US elections in November.”

Outlets participating in the September 21 Youth Takeover Day will invite first-time voters and other young people to collaborate with newsroom editors on projects including reporting stories, making videos, producing radio, podcast or TV segments, hosting social media takeovers, writing opinion pieces or simply being interviewed. Each participating newsroom will choose the form of collaboration that best suits it. The Guardian is inviting first-time voters to serve as guest editors of its homepage. VICE Media Group has committed to publishing stories solely on the topic of climate change and climate justice for the entire 24 hours of September 21.

Like previous Covering Climate Now coverage weeks, the September 21 to 28 week will feature newsmaker interviews, in-depth reporting, cutting-edge analysis and graphics, with content shared throughout the partnership. Collectively, the coverage will underscore the pivotal importance of the 2020 US elections to the future of the climate crisis, and its solutions.

November’s vote will decide, for example, whether the US goes ahead with plans to withdraw from the Paris Agreement 100 days from now, the day after Election Day. To highlight the stakes, Guardian US has launched ‘100 Days to Save the Earth’, a daily series that will focus on the implications of the world’s biggest economy  leaving the agreement, which aims to limit temperature rise “well below” 2 degrees C.

Co-founded by the Columbia Journalism Review and The Nation, Covering Climate Now is a global consortium of 400-plus news outlets with a combined audience approaching 2 billion people committed to improving coverage of the climate story. News outlets that wish to participate in the “First-Time Voter Youth Takeover Day” or join Covering Climate Now are invited to get in touch with editors@coveringclimatenow.org.