“We’re drops in the ocean, but eventually, those drops add up to something big.” 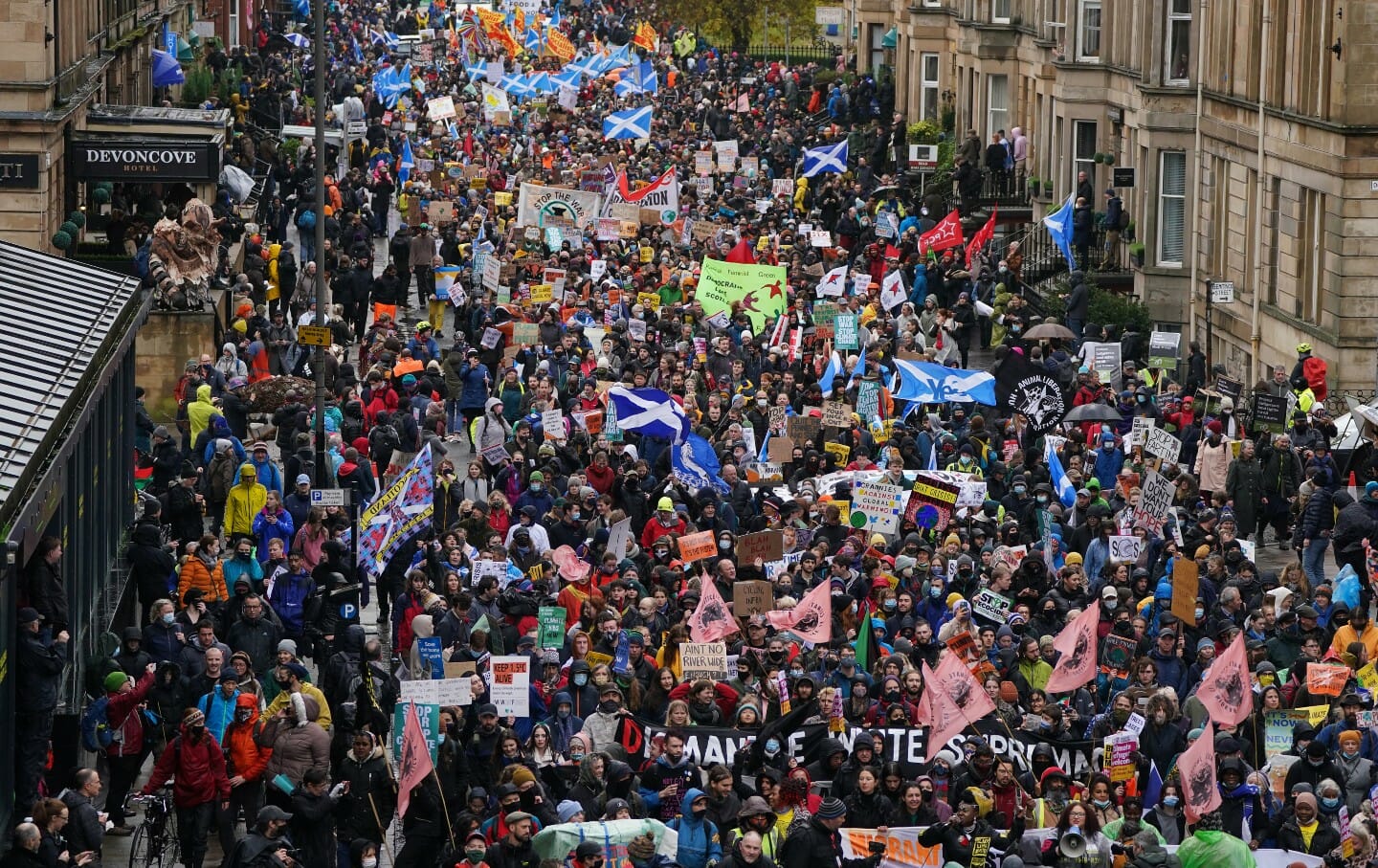 This story is publishable by Covering Climate Now partners.

GLASGOW, SCOTLAND—“I’d feel ridiculous if I weren’t here,” said Tom Birch, a teacher from Edinburg, as he carried a sign reading “Soon Humanity Will Be Net-Zero.” Birch was among the many tens of thousands of marchers who filled the streets of Glasgow, host of the United Nations COP26 climate conference, on Saturday as part of a Global Day for Climate Justice. “You get lifted up seeing all these people who care, who aren’t just sitting at home in our silos complaining,” he added. “This is the moment to make our voices heard. It’s our last chance.”

“Pledges are not action,” read the back of Birch’s sign, summarizing many activists’ critique of the net-zero emissions pledges that governments and corporations have made at COP26. Eva Wewgorski, a librarian from Edinburgh who created the sign, said that “World leaders are acting like these pledges will solve the problem. But there’ve been countless pledges over the decades that haven’t been kept, so why should we believe them now?”

Coming at the midway point of the two-week COP 26 conference, the Global Day for Climate Justice also featured demonstrations in London, Paris, South Korea, Indonesia, and the Philippines. The Guardian reported that there were more than 300 protests worldwide, with 100 in the United Kingdom alone.

Although the Glasgow march included representatives of Indigenous peoples from South America and youth activists such as Vanessa Nakate of Uganda, most of the crowd were locals judging from the paucity of umbrellas, despite bursts of heavy rain and gusty winds. “We’re used to the rain,” a local soccer coach and shopkeeper who gave only his first name, Niall, said with a grin.

Wearing uniforms of sparkling gold lamé, a dozen musicians with a local brass band called “Brass, Aye?” got marchers dancing with pulsing renditions of “When the Saints Go Marching In” and other New Orleans standards. “We’re here to call for climate justice and bring a bit of joy and vibrancy to this march,” said Scott, a blonde trombone player who directed the group.

A second group of street artists dressed head to toe in blood red, with faces painted white and set in grim expressions, stayed completely silent as they marched through Nelson Mandela Place in the heart of the city on their way to the march’s terminus on the Glasgow Green.

“Inside that conference of polluters, the climate criminals are hiding behind barbed wire and fences and lines of police,” Asad Rehman of the COP26 Coalition of activist groups, told the crowd on Glasgow Green. “We’re not going to accept their suicide pact.”

Police officers in yellow vests were especially noticeable around an office building of Scottish Power, the electric utility, at the intersection of St. Vincent and North streets. Positioned 10 paces apart behind metal barriers that confined the marchers to the middle of the street, the officers stood with hands folded across their waists, watchful but not aggressive. As the crowd passed by at 2pm, a rainbow briefly illuminated the northern sky, leading a mother pushing a toddler in a stroller to remark, “That’s a nice omen, isn’t it?”

“The right to protest is a cornerstone of democracy; it’s a direct way to speak to your leaders without having to wait for an election,” said Danielle, 19, a Glasgow resident marching with a contingent from Tear Fund, a Christian NGO working to alleviate poverty in the Global South through advancing social justice rather than conventional foreign aid. “Movements develop over time,” she added. “Generations of people have been doing this kind of witnessing for years, and world leaders are starting to listen because of that. Eventually, you reach a watershed moment, and that’s what’s happening now.”

Carrying signs quoting a verse from the Old Testament book of Micah—“Act justly, love mercy, walk humbly,” Danielle and three other young women with Tear Fund set off from a muddy hillside in Kelvingrove Park where long strips of yellow cloth spelled out, “Amazonia For Life: Protect 80% by 2025.”

“Countries in the Global South are paying more to service their debt than the $100 billion a year in climate reparations they’re supposed to get at COP,” said Mollie Somerville, a grandmother marching with a group whose yellow vests read, “Cancel the Debt for Climate Justice.” “That debt is owed mostly to private banks that are making huge profits and don’t need that money,” she said. “No, I haven’t heard COP leaders talk about this issue yet, but there’s still time, so I’m hoping that this march will put pressure on them.”

“Protests like this, it gives people a feeling of solidarity, knowing that we’re not alone,” added Somerville, who said she was “extremely worried” about the future awaiting her three grandchildren and a fourth expected next week. “I think government and business leaders see that these protests are getting bigger and the time for action is now. Standing here in the cold and the rain, that’s why we do this. At times, it feels like we’re drops in the ocean. But eventually, those drops add up to something big.”

Mark Hertsgaard is the co-founder and executive director of Covering Climate and the environment correspondent for The Nation. 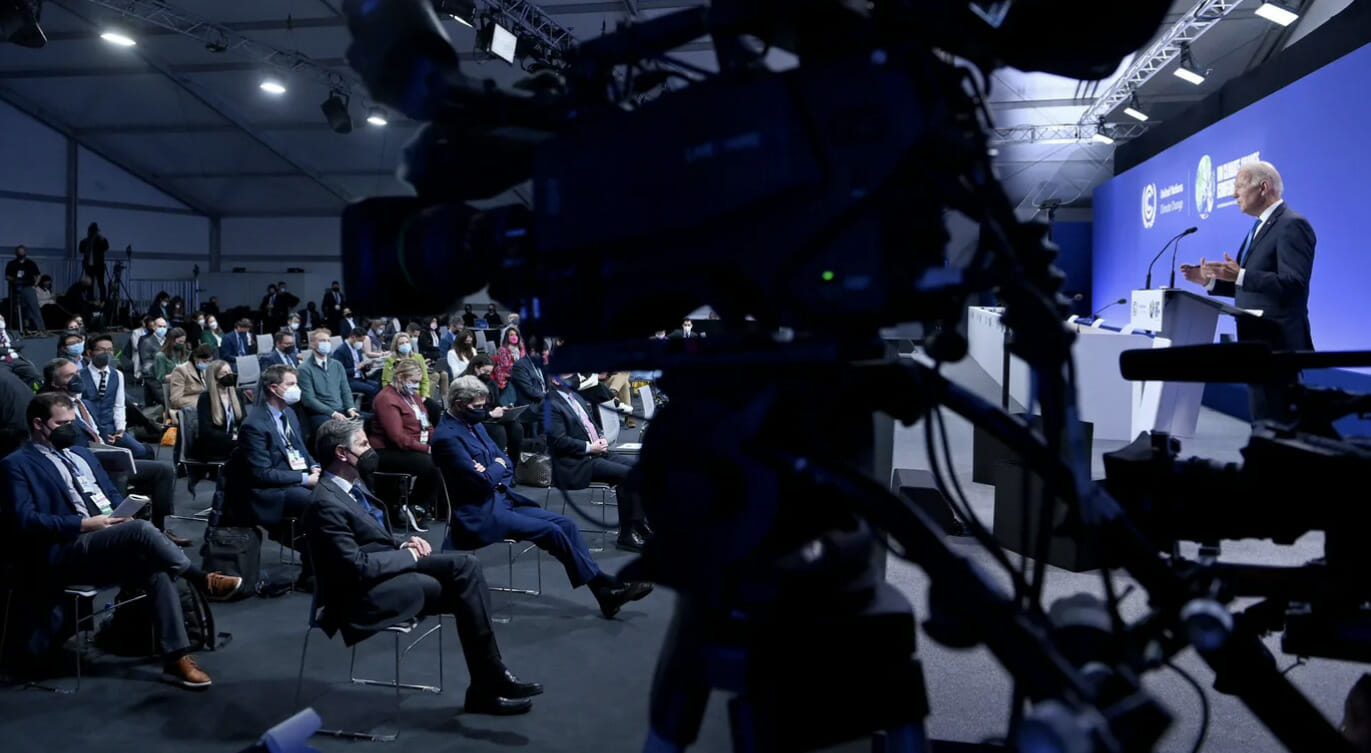 At COP26, some US newsrooms are finally stepping up — but will it last? 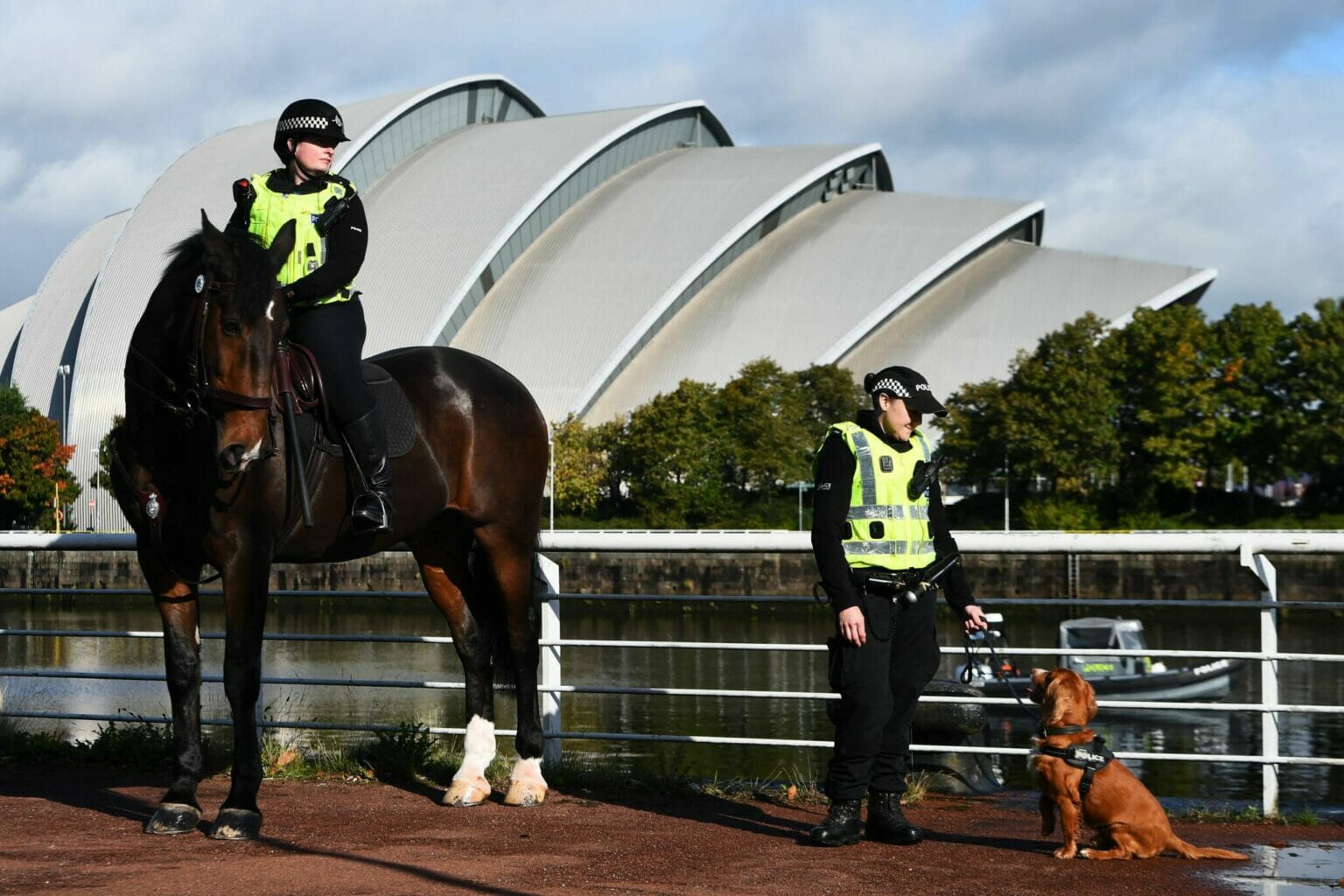 Cover the COP26 Climate Summit Like Our Lives Depend on It