Will Climate Break Through in Big Media’s Elections Coverage?

Journalists at CBS, NBC, CNN, TIME, and The Guardian are trying—but journalism as a whole needs to do better. 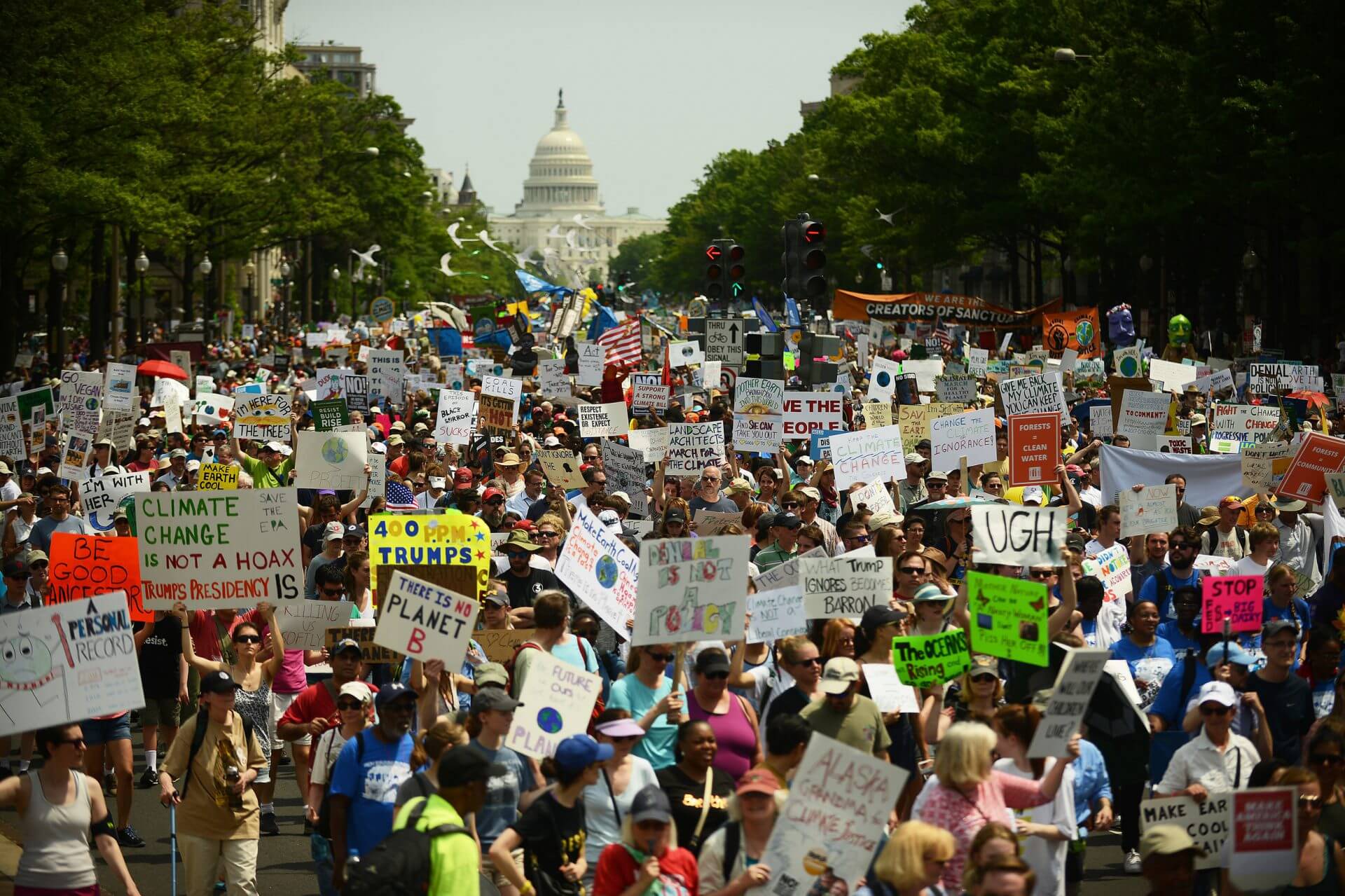 On November 4, the United States will officially leave the Paris climate accord. The accord, agreed upon five years ago by virtually every country on earth, commits governments to keeping global temperature rise “well below” 2 degrees Celsius—a sensible ambition considering the record heat waves, hurricanes, and other forms of climate chaos now erupting around the world after “only” 1 degree of warming. Whether the US departure from the accord is sustained (in the event that Republican president Donald Trump is re-elected) or reversed (if Democratic nominee Joe Biden wins) is one of many reasons why the 2020 US election is, as much as anything, a climate-change election.

With fewer than 100 days remaining before Election Day, journalists at some of America’s leading news organizations are working with their own newsrooms and others to make sure voters and the public at large understand what’s at stake.

“It’s not our responsibility to tell people who to vote for, but it is important to lay out the consequences of what those decisions are, and that we can do very, very clearly,” Al Ortiz of CBS News said at a July 30 “Talking Shop” webinar of Covering Climate Now. Ortiz, vice president of news standards and practices at CBS, has covered presidential campaigns since the 1980s and will direct the network’s election night coverage this year. The challenge, he said, is that climate change can be “drowned out” by other urgent stories, including COVID-19, Black Lives Matter protests, and the dismal state of the economy. “But there’s a climate connection to just about everything.” For example, he said, “reconstructing from this economic disaster … is going to involve a lot of choices about whether we try to rebuild [using] old technologies or environmentally responsible technologies.”

“Countries and financial institutions around the world have spent some $11 trillion [to stimulate their Covid-ravaged economies], and they’re going to be spending trillions more,” Justin Worland, the environment and energy correspondent for TIME, said. In the magazine’s July 9 cover story, “One Last Chance,” Worland wrote that 2020 will be remembered as the year when humanity decided whether “to keep driving off the climate cliff—or take the last exit.” To wit, the debate around COVID stimulus spending is between “folks who want to bail out coal and build new roads to lock us into a carbon-intensive economy and others [who] are focusing on ways to build a greener economy,” Worland told the webinar audience. “Who controls Washington will be central to those decisions.” [On August 3, an open letter published by some of the world’s leading economists urged that COVID stimulus spending help end the carbon economy, arguing that, “If we attempt an economic rebuilding whose guiding principle is a return to ‘business as usual’ we will simply substitute one crisis for another.”]

“People consider climate like [it’s] one menu item when you go in to vote, and I’m saying, ‘No, it’s the whole restaurant,’” said Bill Weir, the chief climate correspondent at CNN. “Everything on that menu ties back to the health of a living planet. Foreign policy, economics, social justice, civil unrest, novel viruses—all of these things just get intensified in a warmer world.” In April, CNN broadcast Weir’s landmark 90-minute special on the climate crisis and its solutions, “The Road To Change.” Critical reaction was so positive that CNN will air the special again on August 8.

The Guardian, meanwhile, has launched “100 Days To Save the Earth,” a series counting down the days to the US departure from the Paris accord. “It’s a big banner across our site every day with an animated clock that [counts down from] 100, and a new factoid about climate change that corresponds to each day,” Jane Spencer, the deputy editor of Guardian US, said. “We also have a series landing page where we’re doing all kinds of climate coverage. It’s a way to keep climate change in the national conversation during the election, reminding people that it’s really one of the core issues at stake.”

The Guardian will join other Covering Climate Now partners, including VICE Media Group, NBC News, Columbia Journalism Review, The Nation, and NowThis, in hosting a “First-Time Voter Youth Takeover Day” to amplify the voices of the generation whose lives will be most profoundly shaped by how the next US president and Congress handle the climate crisis in this critical moment. On September 21, participating outlets are highlighting the experiences of first-time voters and other young people. In some cases, those young people will collaborate with newsroom editors on reporting stories, making videos, and producing radio, podcast or TV segments. In others, newsrooms will hand over the reigns to their social media accounts. Still others will run climate-focused op-eds by young people or simply interview them for reported pieces. The day will kick off a week of joint coverage by Covering Climate Now’s partners, from September 21 to 28, that will feature newsmaker interviews, in-depth reporting, and cutting edge analysis focused on the climate-politics connection in 2020.

Spotlighting young people is already core to the mission of “Stay Tuned,” a twice-daily NBC News show that draws between 4 and 10 million viewers a day. The show appears not on television but on Instagram, Snapchat, TikTok, and other online platforms. The audience is “mainly Gen Z and millennials, and climate change is something they care very, very much about,” Savannah Sellers, the show’s anchor, told the webinar group. “When you ask, ‘Why are you voting for this [candidate]?’ climate change [is] the first thing out of their mouth 90 percent of the time.” Noting that her program has “huge viewership in very red states,” Sellers added that climate is no longer an ideological issue “as much as it is generational.”

A second divide is between people who accept science and those who reject it, the panelists added, emphasizing that science has to guide climate coverage regardless of the political implications. “It’s pretty clear what side is more aligned with science and which isn’t, and that’s not a partisan statement,” Worland remarked. “That’s just reality, and it’s important not to shy away from that in the name of false balance.”

The 2020 US elections carry staggering consequences for life on this planet, and the climate story will only get bigger in years to come. Heat-trapping emissions must be cut in half by 2030 to avoid catastrophic, possibly irreversible climate impacts, scientists say. That will require transforming the world economy at an “unprecedented” scale and speed. Humanity’s race to meet this deadline is the defining story of our time; newsrooms that want to remain relevant should prioritize it sooner rather than later. “Eventually,” said Weir, “we’re all going to be climate reporters, whether we call it that or not. Because it’s going to touch everything in more obvious ways every year.”

***IN MEMORIAM: With great sorrow, Covering Climate Now shares the news that our dear colleague Robert Eshelman-Håkansson died suddenly of a heart attack in Brooklyn on July 15, one day after his 47th birthday. Rob was instrumental in launching Covering Climate Now last summer, and we are heartbroken. Journalist, teacher, community organizer, political operative, and bon vivant, Rob was a proud son of the working class who loved literature and believed fiercely in social justice, particularly workers’ rights. We, along with his many friends, admirers, and loved ones, will miss him terribly.***

Now, here’s your weekly sampling of the latest in climate news, from across the CCNow collaboration.