The climate story is deeply political, but reporters shouldn’t shy from it for fear of partisanship. 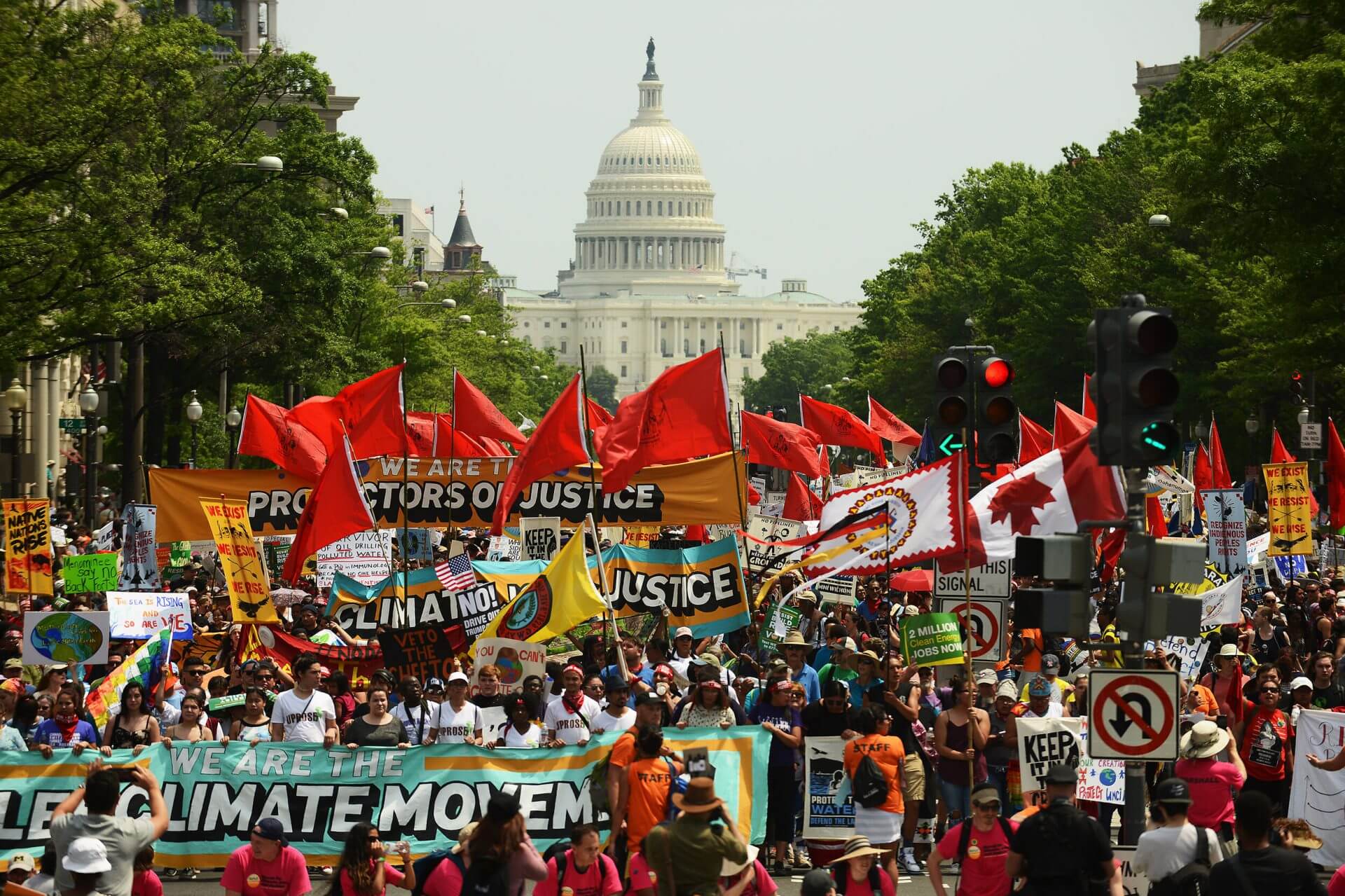 Climate change is deeply political. That is, it will take strong policies to fend off the greatest collective threat humanity has ever known, and those policies will be decided through political activities including elections, lawmaking, and public debate. But that does not mean the climate story is a partisan endeavor—the political imperative is based on science, not ideology. Helping our audiences to see through the partisanship, and to understand the necessity of climate-smart policies (and voting!), is not only responsible. It’s our job as journalists.

These story recommendations—scalable and adaptable for every publication’s needs, regardless of medium and location—will be updated to reflect the latest developments in the climate story. Be sure to also check out our August 2020 “Talking Shop” webinar on covering the 2020 elections through a climate lens.

Climate Is a Story in Every Election

At Covering Climate Now, we believe climate change should be a defining issue in elections everywhere on earth and at all levels of government. This is, again, a scientific judgment, not a political one, though it does have political implications. As the scientists of the UN’s Intergovernmental Panel on Climate Change declared in 2018, humanity must slash greenhouse gas emissions in half by 2030 to avoid catastrophe. This will require transforming the world’s energy, transportation, agriculture, construction, and finance sectors at a speed “unprecedented” in human history, the scientists added, meaning there’s no time to treat climate as anything but essential in our politics.

Tell your audiences what their local and national leaders are doing about this scientific imperative, for good or ill. Check voting records and consult watchdog groups to learn whether elected officials respect climate science or dismiss it, want to limit fossil fuel production and subsidies or expand them, etc.

Where do candidates for city council, mayor, state legislatures, and Congress stand? What specific policies do they endorse and oppose—and how do those policies square with what science demands? What have they done so far to help communities prepare for climate effects; what have they failed to do, and what opportunities have they foregone? Remember: the issues candidates are pushed on during campaigns drive the commitments and promises they are judged against in office. So no candidate gets a pass, no matter their party affiliation or voting history.

An issue that binds all issues. A candidate might pitch themselves as the ‘national security candidate’ or the ‘jobs’ candidate; the ‘health care’ candidate or, for that matter, the ‘climate’ candidate. Don’t let campaigns so easily simplify the narrative. All candidates should be pressed on how well they understand that climate change cuts across and binds virtually every public issue. It has the power to destabilize the world and wreck economies. It stands to ruin public health, with ever-escalating costs, and to demand revisions in school curriculums to help prepare students to cope with climate effects. If candidates demur on climate change, force the issue. A smart climate question—one that frames climate change as an urgent, local, and human issue with solutions at hand—is almost always appropriate.

Follow up & play the story bigger. It’s not enough to do one or two stories on climate change as it relates to a given candidate or electoral race. As the defining story of our time, climate should be central to campaign narratives, just as the economy, the pandemic, and the historic protests against racism should be. In short, this is a story for political reporters and everyone else in your newsroom—not just the science reporters. The word ‘climate’ should appear in campaign story headlines and scripts so often that the public won’t miss it.

Be forthright about the partisan divide. Although American voters increasingly agree across ideological lines that climate change is important and worrisome—and people under age 35 are especially concerned—the political elites remain at odds, with the two major political parties holding dramatically different views of the issue and what should be done about it. Reporting these differences is not a partisan act by journalists; it is a reflection of political reality that the parties themselves must be held responsible for. If one party or candidate offers credible policies on climate and the other does not, it’s up to the other party or candidate to catch up. It’s not journalists’ job to wait for them in the name of false equivalence.

The term Green New Deal originated in the US, and, in variations, it has become the de facto position of the Democratic party.

Amid the pandemic, calls have only grown for Green New Deal policies. Similar green investment-and-jobs programs have been embraced by governments including the European Union, India, and South Korea, even as an enormous disinformation campaign has been mounted to derail them. The idea behind such policies is that now, as governments and central banks are spending trillions of dollars to revive pandemic-stricken economies, is the best opportunity humanity will have to transform economies in the ways needed to reverse the march towards climate catastrophe.

Newsrooms can meet the moment by offering explainers, based on interviews with proponents (e.g., the Sunrise Movement) and fair-minded critics: What exactly is a Green New Deal, how would it work, who would pay, and who would benefit? How would it reshape your local area, and what other plans exist that aim to achieve similar goals?

Important as electoral campaigns are, we will reach audiences best if our reporting foregrounds how climate change plays out in people’s daily lives. Regardless of where you live, climate change is coming, whether in the form of heat waves, wildfires, droughts, floods, or rising sea levels. The effects on agriculture, infrastructure, and health will be apparent soon, if they aren’t already. Sometimes the best way to tell a climate policy story is to look at how climate change is affecting the local area—and how current policies have helped to mitigate or exacerbate the damage. Electoral politics should make an appearance to demonstrate that climate change is the result of the actions governments, businesses, and the public at large have taken—but it’s okay for politics to take a back seat, for once. (Some audiences will surely appreciate a break from the partisan back-and-forth!)

Climate solutions at home & elsewhere. What solutions have been implemented locally to fend off climate change or make your local community resilient to it? Have they been effective, and are they adequately funded? Who are the key voices on these solutions, and how have politicians aided or limited their efforts? Don’t forget that people elsewhere, in your country and in other countries, are facing the same issues. Consider stories that look at how communities elsewhere are dealing with the same challenges your area faces. What political logjams did they face, and what can local leaders learn from them?

Environmental justice. Fundamental to the climate story is the fact that communities of color and the poor will tend to bear the worst of climate change’s impacts. Seek out those who are marginalized in your community and help make their voices and needs central to your local climate discussion. Then put politicians on the hook to address their experiences and needs.

In recent years, young activists have upended climate politics worldwide and pushed the climate crisis into our news coverage and to the fore of political agendas. That only makes sense, since young people are the ones whose lives will be most profoundly shaped, one way or another, by how governments confront the climate crisis. As such, journalists should be focusing on how these young people and their work are altering the political calculus.

In the US, you might start with the youth-led Sunrise Movement, which operates chapters in cities all over America—including, likely, one near you—and whose co-founder, Varshni Prakash, was called on to help write presumptive Democratic nominee Joe Biden’s climate plan (along with Representative Alexandria Ocasio-Cortez , who near-single handedly brought the Green New Deal into the national conversation). What do these young leaders have to say, and how are their voices shaking up the political scene?

And don’t assume this goes only for the activist left. In Kentucky, for example, young Republicans are urging leaders to embrace climate action. At 2020’s Conservative Political Action Conference in Washington, DC, young conservatives set up a booth advocating for market-led climate solutions. Party elders may prove slow to join, but moving forward climate is sure to play a more central role: Climate change is identified as a leading concern among young voters, and the concern cuts across party lines.

Sometimes the best clues to how a candidate will govern is who bankrolls their campaign. Incumbents in particular leave behind a paper trail of past campaign contributions that offer insights. What do a candidates’ backers say about their environmental allegiances that their other pronouncements might obscure? And what do candidates have to say about contributions from fossil fuel companies and their associates?

Watchdog groups, including the Center for Responsive Politics, that compile and analyze contribution records data are a gold mine of authoritative information. It can be harder to discern the fingerprints of “dark money” groups, but outfits including CCNow partner Sludge have done so to great effect, as you’ll see in the below examples.

And, zooming out from the immediate campaigns, how have local financial interests shaped your area’s climate future over the years? What role have those interests—think companies and banks but also labor unions and university research outfits—played in local and national politics, and how has that helped or hurt with respect to climate?