Watch Now: Boosting Your Climate Confidence on Every Beat

Want to boost your climate chops but unsure where to start? In our latest Talking Shop, a panel of experienced journalists from CBS, HuffPost, TIME, and Climate Matters tell you how. 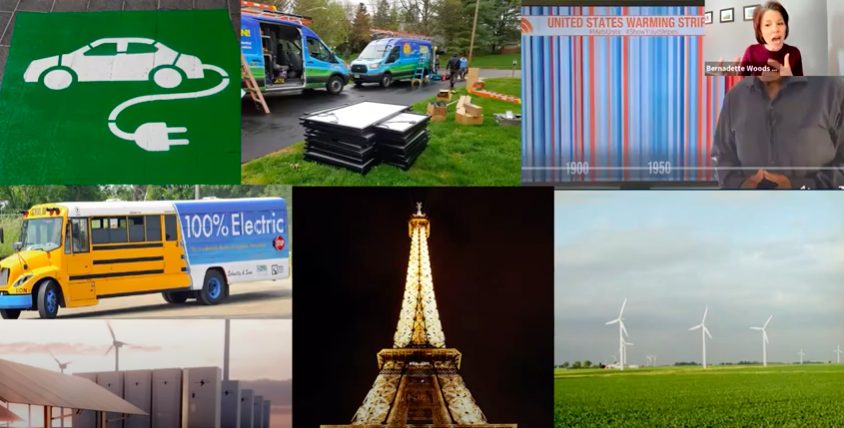 Reporters need to get up to speed fast on the climate story both because scientists say humanity faces a climate emergency AND because the Biden administration is making climate change central to its economic, foreign policy, and social justice agendas.

In our latest Talking Shop, we discuss how journalists can raise their own climate competence, help cultivate an all-of-newsroom approach to the climate story, and find new ways to tell that story.

Woods Placky kicks off the webinar with a quick Climate Science 101, featuring easy to follow data and charts.

Below, we’ve highlighted some of the key exchanges from the webinar (lightly edited for clarity), following which you’ll find a list of authoritative background resources.

Justin Worland: At Time magazine, we’re helping our colleagues get up to speed so they understand the basics of climate science and think about ways they can contribute to climate coverage in their own stories. For me, that means doing meetings, Slack messages, and encouraging my colleagues to jump into climate topics. I also look at the upcoming story lists and say, oh, this person is working on a story that should include a paragraph on climate, and then finding ways to insert myself into that discussion. The climate has totally changed around climate recently, and there is a lot more interest that’s bubbling up at TIME that isn’t initiated by me.

Ben Tracy: What’s been really refreshing for me to see is that on the daily stories people are reporting at CBS, they are mentioning climate change when it’s appropriate instead of just waiting for a story to be done that’s a big overview of the topic. It’s being woven into the stories correspondents are doing about the Texas blackouts, for example. They talked about how climate is changing the weather in Texas and how the grid there is not prepared for that.

Kate Sheppard: There’s eight people on my team. We have a wide range of beats focused on different policy challenges and we connect many of them to the climate crisis. I try to take an all-of-beats approach to climate in our newsroom because it’s a huge challenge across all these issues that we cover; it’s a political challenge, it’s a policy challenge, it’s a science challenge, it’s international relations, it’s health. I see climate as the opposite of a niche beat, it underlies so many things. And having an understanding of those connections is really important for any reporter in 2021.

Kate Sheppard: For us, it’s a lot about our coordination between our teams. It’s just constant conversation, particularly between editors, about what you’re working on, and asking for help. It’s not siloed because this is not how we see the climate issue.

Ben Tracy: Last week we had a good example at CBS of how this can work well. On the day the US rejoined the Paris Climate Accord my colleague on the digital side at CBS, published an excellent primer on the Paris Accord and I had a one-on-one interview with John Kerry about why the US was rejoining. It was a nice one-two punch on the TV side and digital side.

Mark Hertsgaard: A TV colleague in Texas, a meteorologist, asks what to do about his management’s fear of losing viewers by talking about climate change when some viewers don’t believe in it.

Ben Tracy: It’s not journalism to ignore what you know to be true, based on what you think your viewers want to hear. I think there are ways to talk about this in a less political fashion and not make it a Republican, Democrat, conservative, liberal, climate deniers or climate believers issue. I think you can connect the dots for people without having to be as overt about it, if you are worried about turning people off.  I also believe we should attempt to try to bring people into the tent and not alienate people from this, so they can learn.

Kate Sheppard: One thing that I’ve learned over the years is always to try to connect what we know about climate change to what people already care about. And you’ll find that that is actually pretty easy. I grew up on a farm. I know lots of Republican farmers who totally understand that what they’re seeing is not normal, whether it’s precipitation patterns or extreme weather events. There are many people who fundamentally understand that this is not normal and that we’re experiencing some really extreme changes. I think it’s something you can clearly communicate with them about.

Mark Hertsgaard: I highly recommend that everyone watch Verify Road Trip, a documentary by WFAA-TV’s reporter David Schechter, who won the 2021 duPont-Columbia Silver Baton. Schechter took a climate denier on a road trip to Alaska to help him understand climate change. He never once condescended to the point of view that that viewer had, and by the end, the viewer had changed his opinion about climate change.

Bernadette Woods Placky: It’s about connecting the dots in the moments. You could take a warm spring day, for example, and say, we’re getting more of these with climate change and show a graph. We have a ton of resources at Climate Central for this exact purpose and the full program to support you in doing this. If you go to the Yale Climate Opinion Maps you can get a better sense of the public’s thinking on climate. There are misconceptions about what audiences believe. Less than 10% of the population will not listen to science, but 90% of the population will.  So if you silence yourself because of that 10 percent, you’re ignoring the 90% who want to know more about what’s happening with climate.

The importance of partnerships, freelancers and cold calling

Kate Sheppard: We’re a Covering Climate Now partner and we’re also part of Climate Desk, which is run through Mother Jones. We have partnered with national and international organizations that support local and regional journalism. We’re always looking for ways that we can partner with folks around the country to enhance local storytelling and put it into a national context. Another thing we’ve done is use freelance networks to enhance our climate coverage and highlight stories that are in parts of the country where we’re not.

Ben Tracy: I’ve been cold calling experts and scientists and just having conversations. The other day I read about this person at NOAA, who’s their expert on hurricane tracking. I called him up, he talked to me for an hour and it led to two story ideas.

The role of investigative reporting

Ben Tracy: With the Biden administration, there’s been a lot of promises on climate and our job is to hold their feet to the fire. In terms of what companies have done in the past, there’s already been great journalism on that front and we will continue to need more as we move forward.

Mark Hertsgaard: Let’s also hold accountable the same people who have been lying and obstructing progress on this in Washington for decades. I’m sorry to say, that is now mainly the Republican Party.

Justin Worland: Not every piece of journalism is going to be groundbreaking in the sense that it’s going to expose something we didn’t know. But for your readers, it might be exposing something that they haven’t grappled yet with. I would encourage a continued set of investigations and research, even on things that have already been addressed such as #Exxonknew. I suggest finding a niche and exposing new connections that people aren’t talking about.

Preparing yourself for climate reporting

Kate Sheppard: Find opportunities to be ready for what this beat might throw at you. I’m personally seeking out Red Cross safety training courses in case I’m out in the field in extreme weather or other hostile events. Also, it’s important that you take care of your physical and mental health because the last year has been constant crisis coverage on COVID, racial injustice and economic discord. Be ready for the long haul because the climate crisis is going to be here for a long time.

Mark is encouraging all reporters to participate in Covering Climate Now’s next week of joint media coverage in the run-up to Earth Day on April 22. Our partners will be reporting stories around the theme, Living Through the Climate Emergency.

What topics would you like covered in our next Talking Shop? Feel free to send us an email at coveringeditors@coveringclimatenow.org and be sure to sign up for our Climate Beat newsletter.