For the second week of COP26, we’ll have dispatches available for publication by partners, curated partner coverage, and resources to help tell the story. 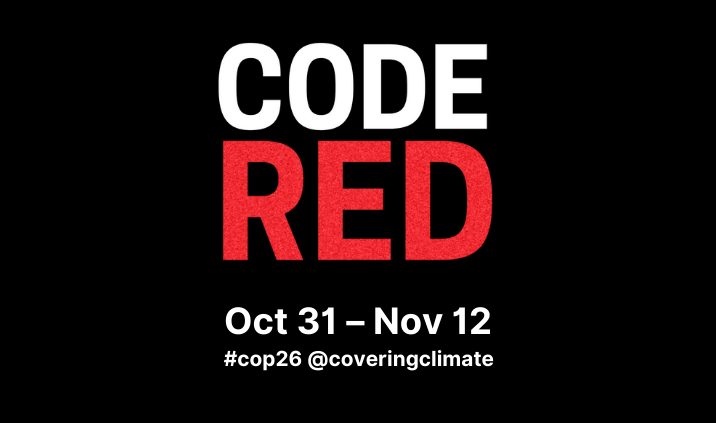 We’re thrilled that our partners produced thousands of stories on the COP26 climate summit throughout our joint coverage week, which coincided with the first week of the gathering in Glasgow.

While many stories covered the day’s breaking news, plenty dug into the deeper issues, including the themes we encouraged in the lead up to the summit: the imperative of 1.5 degrees Celsius, climate justice as both a moral imperative and in the self-interest of rich countries, and climate solutions, including the political and economic barriers to implementing them. It’s vital that journalists everywhere continue to help audiences understand what’s at stake at COP26: World leaders will either agree on a credible path forward to rapidly end fossil fuel consumption, or humanity risks further and potentially irreversible climate destruction.

As presidents and prime ministers arrived in Glasgow last week with pledges to curb carbon emissions in hand, the US news media in particular stepped up their game, as CCNow’s executive director Mark Hertsgaard noted in his media analysis during the opening week of the summit.

“Never have US news organizations devoted as many newsroom resources, produced the sheer volume of coverage, or given the story such big play as they did in the opening days of COP26,” he writes. Hertsgaard has been covering UN climate conferences since the 1992 Earth Summit in Rio.

Much of the summit coverage has moved beyond breaking news, running stories that humanize the climate crisis. This includes reporting from our new climate migration series, Flight for Their Lives, which launched in tandem with the summit, and includes many stories publishable by partners.

After most heads of state left Scotland following the World Leaders Summit, delegations got down to the real work of thrashing out deals to cut emissions. In other words, there will be plenty more news to report, as well as a strong news hook for myriad other stories happening at the conference.

To assist in your reporting, check out the explainers that we produced for journalists ahead of the summit — How to Cover COP26 and What We Mean When We Talk About 1.5 Degrees C — as well as press events we convened with newsmakers that you can find here.

Hertsgaard will be on the ground in Glasgow, filing regular dispatches for partners to publish on their own platforms. They are:

Hertsgaard is also available for press interviews and radio and TV appearances. To find out more, email us at editors@coveringclimatenow.org.

Note that all stories displayed with this icon

denote that they are publishable by partners. We’ll continue to curate stories about the summit here, and as always the full roster of stories that partners are free to publish on their own sites can be found in our Sharing Library.

We also are delighted by the activity we’re seeing around COP26 on social media. We encourage you to continue to engage your audience on every platform about a story that matters to audiences everywhere. When posting, be sure to tag @CoveringClimate and use the hashtag #COP26 so we can help spread the word.