Honoring journalists from every corner of the newsroom for their reporting on all dimensions of the climate story, especially solutions. 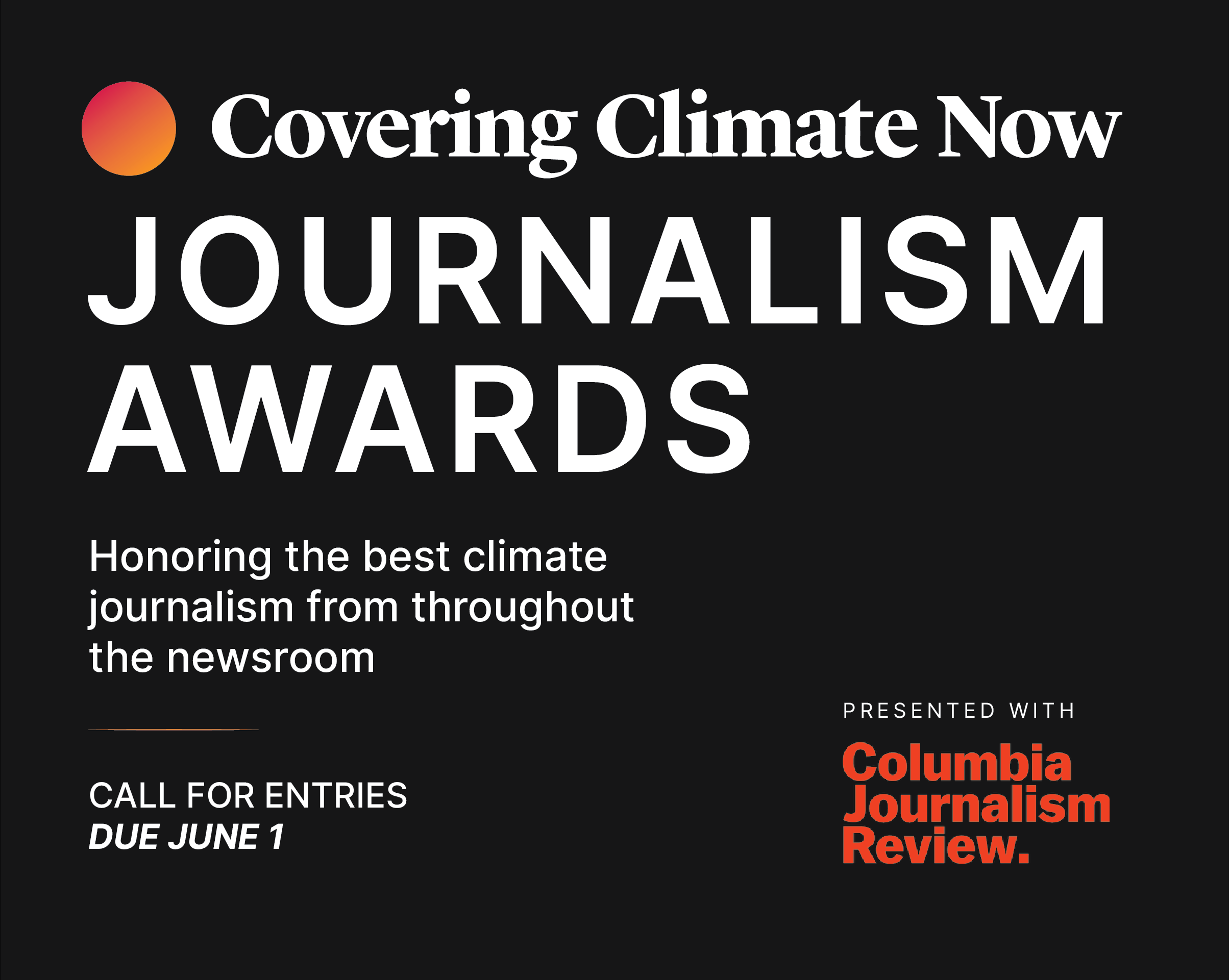 The first annual Covering Climate Now Journalism Awards will honor exemplary coverage of the defining story of our time. Submissions are now closed.

Winning entries will feature great storytelling that – among other strengths – is rooted in science, humanizes climate change, empowers audiences, and holds power to account. The jurors will recognize work that communicates the many dimensions of the challenge; that highlights and scrutinizes solutions; that calls out disinformation and self-dealing; and that recognizes the disproportionate impacts that climate change has on communities of color and the poor.

Entries (in English) will be accepted from news organizations or individual journalists from every corner of the newsroom who are producing coverage in print, digital, audio, video, and multimedia formats that report on all dimensions of the climate emergency, especially its solutions. Categories are detailed below.

There is no entry fee, and more than one entry may be submitted.

Covering Climate Now and the Columbia Journalism Review will convene a jury of distinguished journalists to review the entries. Winners will be notified individually this summer and all winners will be publicly celebrated at a globally-accessible awards ceremony in September hosted by Al Roker, TODAY weather and feature anchor and co-host of the 3rd Hour of TODAY and Savannah Sellers, correspondent for NBC News and MSNBC, co-anchor of NBC News NOW and co-host of NBC News’ Stay Tuned program.

Read the awards announcement and for questions about the entry process, please be in touch with us at: awards@coveringclimatenow.org.

Print/Digital
Enter as Short-form (less than 2,000 words) or Long-form.

Video & Television
Enter as short-form (less than 15 minutes) or long-form.

Audio & Radio
Enter as short-form (less than 15 minutes) or long-form.

Any work in which no one medium is considered the primary storytelling medium. For example: A story in which writing, video, and graphics are all fundamental to the story package; or a photography display that makes prominent use of written and audio components.

Entry may represent the collective work of a publication or the work of a single photographer for general coverage or a single-issue focus or series. Entry can include up to 10 photographs that have been publicly published.

This category is for particularly robust work that does not easily fit into any of the previous categories, such as a special package of coverage. Qualifying work may include, for example, a special video or audio series and special issue of, or supplement to, a newspaper or magazine.

Emerging Journalist
A special award for an early-career journalist whose body of work shows exceptional promise and has, in a short time, already shaken up the climate discourse or covered new and significant ground in the climate story.