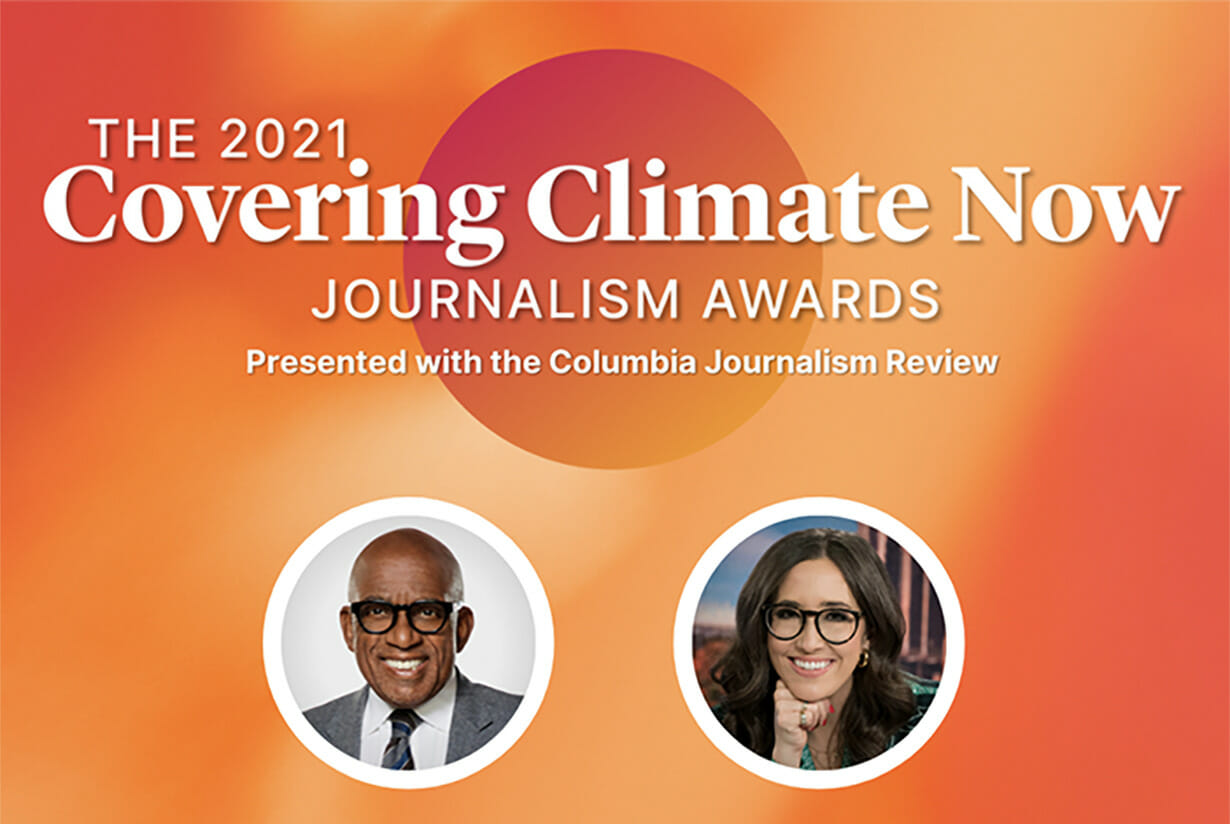 Our inaugural awards celebrated the best in climate journalism.

This podcast provided a rare, insider’s look at the impact of climate change on the Indigenous community of Utqiagvik, Alaska. Through intimate conversations with residents, the journalists drew listeners into a culture unfamiliar to many, revealing the precariousness of tundra existence as the planet warms and the resilience and resourcefulness needed to adapt and survive.

This series dug into the deep historical roots of the fossil fuel industry’s long record of using disinformation to deny climate change. With excellent use of audio clips, this revealing series investigates how Big Oil’s public relations machine—which dates back more than a century to John D. Rockefeller—provided a road map that oil corporations, as well as the tobacco industry, followed to mislead the public for decades.

This program took viewers on an epic road trip across America, introducing people whose lives have been dramatically and often irrevocably transformed by the climate crisis. From wealthy homeowners in Miami spending fortunes to future-proof their homes against rising sea levels, to Iowa’s beleaguered farmers battling unpredictable weather, Weir treated all the people he met, whatever their views, with respect and compassion while dispelling myths and avoiding cliches about the impacts of climate change.

Breathtaking in its ambition and scope, this series pulled together familiar threads about the impact of climate change on migration with a renewed sense of urgency, on a truly global canvas. Painstaking data journalism combined with absorbing storytelling explained what we are seeing today, and what the world might look like tomorrow, with visuals that were impossible to ignore.

This series of photographs combined stunning portraits of people confronting rising sea levels with photographs capturing desperate efforts to hold back water, and aerial images that powerfully documented a community’s climate vulnerability. It provided a compelling visual narrative of the Sisyphean task people faced in the aftermath of a cyclone that washed out protective embankments and triggered recurring high tides.

Edelson’s photo series documented many angles of a devastating story in northern California. From the start of a raging fire, when orange skies blanketed San Francisco, to the moments when fire was actively overtaking homes and livelihoods, to the human toll of complete destruction—striking images captured the overwhelming size of the inferno and its emotional impact on both firefighters and the displaced.

Diaa has produced a body of fine journalism in a region where climate reporting is especially challenging, particularly for women. Diaa has reported a wide range of intersectional climate change stories that impact her community, such as the health impacts of the increased use of coal in Egypt, water scarcity in Iraq, and women at work on the front lines of climate change.

Observing the media’s tendency in the early months of the COVID-19 pandemic to focus on the experiences of mostly white and relatively affluent communities while ignoring the inequalities faced by poorer groups and communities of colors, Garcia questioned the media’s preparedness to use a more inclusive lens as it covers the climate crisis.  This commentary was seen as a needed corrective and a call to action for journalists to do better.

The Sound of Icebergs Melting: My Journey into the Antarctic — The Guardian
By Jonathan Watts

Using evocative multimedia elements to transport readers to the Antarctic, this piece took readers on a sensory journey to the frontline of the climate emergency.  Watt’s storytelling reveals both ominous evidence of glacial melt as well as hopeful signs that concerted action can make a difference.

This package of stories about deforestation in Brazil revealed how the government of President Jair Bolsonaro used the pretext of COVID-19 safety measures to undermine inspection policies intended to protect the rainforest.  Spring’s tenacious coverage is evidence of a reporter who deeply understands his beat, and stays on its cutting edge.

Who Killed the Supergrid? Trump Appointees Short-Circuited Grid Modernization to Help the Coal Industry — InvestigateWest and The Atlantic
By Peter Fairley

This meticulous story revealed the Trump administration’s deliberate effort to bury a federally funded study that provided evidence that a connected super grid would accelerate the growth of wind and solar energy. The story made the abstraction of the nation’s  power grid interesting, and Fairley’s explosive disclosures also led to regulatory change.

This story cleverly used pandemic diseases as a strong hook for a fascinating, detailed story that explained how climate change is driving habitat destruction and species migration, leading to a new wave of pandemics. Goodell employed cinematic techniques, zooming in close for a visceral description of a mosquito bite, before pulling back for interviews with key scientists and then wider still for an historical overview of diseases such as dengue fever and Zika virus.

The Covering Climate Now Journalism Awards are made possible by the generous support of the Michaux Family Foundation, Wayne Crookes, Bob and Sandra Taylor, and a founding grant from the Schumann Media Center.