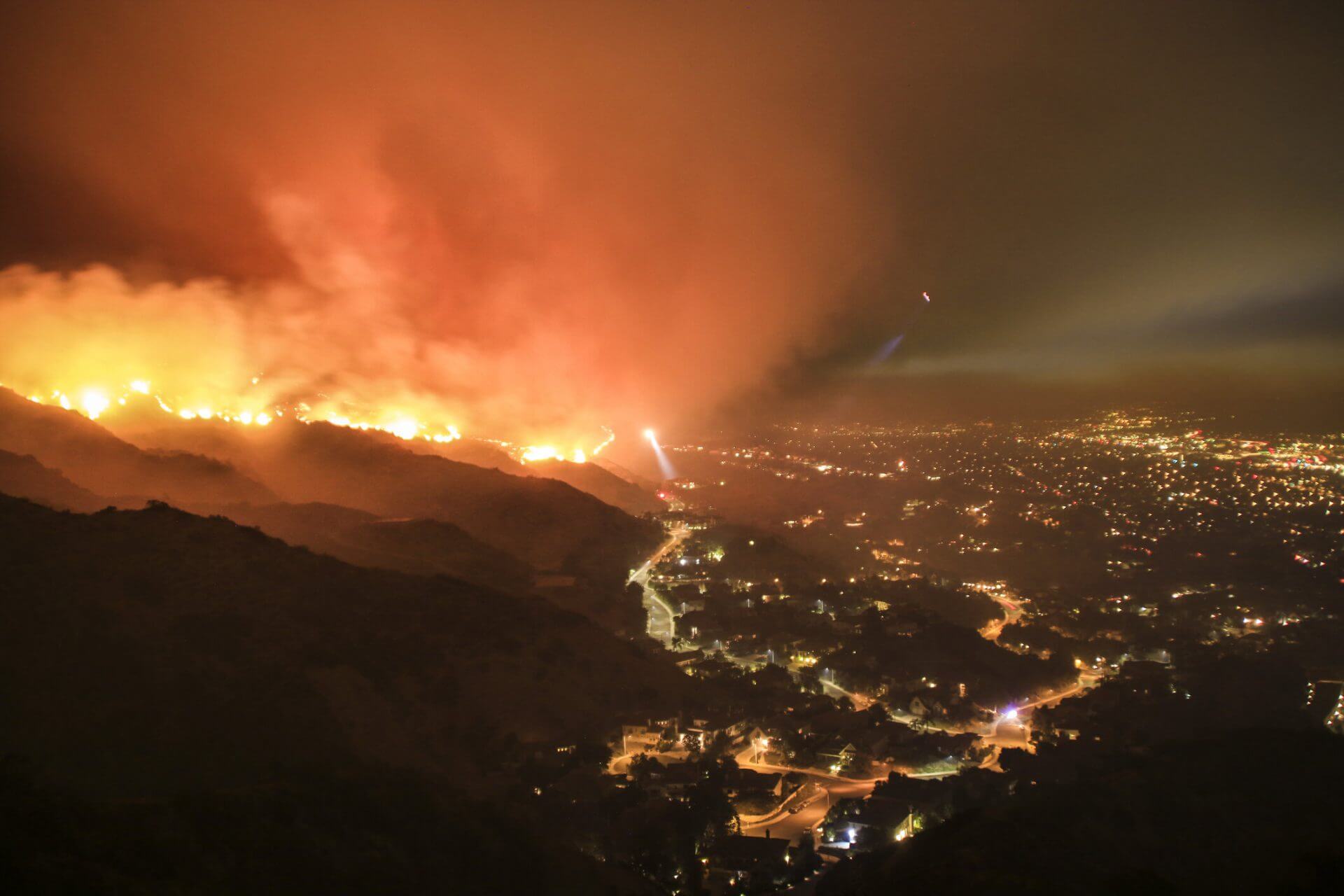 The news is awash in hurricanes, floods, unseasonable snow dumps, record heat waves, and drought. They are not all due to climate change, but the increased frequency and intensity of such extreme weather certainly is. Yet much news coverage makes little to no mention of the climate connection, leaving audiences without context and unaware that humanity is already experiencing climate disruption. (Worse still, some coverage greets this bad news with cheer. An alarmingly unseasonable heat snap, for example, is “a much welcome break from the cold.”) The climate connection need not dominate coverage, nor distract from the vital information audiences need in the face of  emergency weather conditions—but mentioning it is a must.

Here are extreme weather-related tips and story ideas, scalable and adaptable for every publication’s needs, regardless of medium and location. At the bottom, we include the basics of how each type of extreme weather event is made worse by climate change.

This guide will be updated regularly to reflect the latest developments in the climate story. Be sure to also check out our July 2020 “Talking Shop” webinar on covering extreme weather.

Some good news: Weather is a story that journalists already tell well. It’s a top reason audiences tune in to local news. And when extreme weather strikes, meteorologists and reporters at all levels perform admirably, almost without fail. Reporting the climate connection therefore finds journalists in a position of relative strength.

The solution is simple. Often a single, well-placed sentence or clause will do the trick. That is, climate change needn’t be the story or the main thrust of a piece to merit prominent mention. Whether reporting on a looming storm, amid 95mph winds, or in a storm’s devastating aftermath, just say: “This storm is exactly the sort of event scientists around the world associate with global warming,” or, “The hurricane/fire/drought/flood comes at a time when human-caused climate change is making storms like it fiercer and more frequent.”

We recommend giving this context prime placement. Climate change is such a critical factor in extreme weather, and climate understanding is still so low among many of our audiences, that it is helpful to include near the beginning of your story or script.

Drive the point home. If there’s time or space in your story, use a simple analogy or graphic to help emphasize the role of climate change. Climate change “stacks the deck” in favor of extreme weather events, for example, or supercharges normal weather patterns, like steroids. Graphics showing a clear change over time—of annual temperature rise in your locality, for example, or of hurricane strength and frequency over the years—help make climate change concrete for audiences who might otherwise find it difficult to grasp. Climate Central maintains a robust catalogue of easy-to-understand graphics on all types of extreme weather, which can be used directly with attribution or which might serve as inspiration for your own graphics; find them here, under “Extreme Weather Toolkits.”

The nuances of climate communication. You don’t have to be an expert on the science to communicate clearly and simply about climate change. But you should read up on the nuances of public messaging on the subject to avoid some of the pitfalls and confusion that can result from imprecision. This smart and thorough review of best practices, by the World Meteorological Organization, is especially worth your time: Communicating Linkages Between Extreme Events and Climate Change.

Journalists do this well when covering extreme weather. But we need to do a better job of humanizing the climate connection to those weather events. And we know that climate change often disproportionately affects the poor and communities of color. This is seldom clearer than amid extreme weather—when these communities are hit hard, often with scant resources to protect themselves—and in their aftermath, when the communities are the last to receive the support they need to rebuild, sometimes waiting years for help when it comes immediately for their wealthy neighbors. Such inequities often lead to traumatic and life altering displacements of vulnerable people and communities.

As we humanize the storms and all the devastation they bring, it is essential that the stories and voices we elevate are truly representative of those impacted.

Public health. Just as climate change is an accelerant for extreme weather, the factors driving it, including deforestation, make disease outbreaks more likely. Amid the coronavirus pandemic, for example, extreme weather events have found many government’s health and emergency response systems already stretched to breaking. As you cover your locality’s response to disasters, it’s important to note that climate change makes it more likely that our public health systems will be challenged like this again in the future. Are they adapting accordingly?

Every beat. Extreme weather, like climate change, intersects with every aspect of society, including transportation, infrastructure, energy, real estate, housing, agriculture, and commerce. Again, because climate change makes extreme weather more likely, what are local officials doing about it? Is there a plan to upgrade infrastructure and homes to make them more resilient? Is there a plan to aid businesses that will be impacted? And what are the relevant municipalities doing to address the root cause of climate change by reducing their carbon footprint?

Solutions. Nature has built-in safeguards to protect us from the weather. Tropical forests, boreal forests, and coastal forests, like marshes and mangroves, do just that, absorbing and safely storing greenhouse gasses, shielding some communities from high winds, regulating ecosystems, and ultimately helping to mitigate climate change. If you’re looking for a way to avoid the doom and gloom of catastrophic weather events, use them as a peg to address climate change solutions, including stopping deforestation.

Before and After the Storm

Emergency preparedness. As a storm is bearing down, there’s a lot your audience needs to know about how to prepare, how to stay safe, and possibly whether or not to evacuate the area. It can seem like the wrong time to highlight climate change, and indeed it might be depending on the urgency of the storm. We still urge you, however, to mention climate, if only briefly, because people need to understand why storms like this are happening with such frequency and ferocity—and that if we fail to mitigate climate change, more storms like them will keep coming. One line is all it takes to get the point across.

Climate attribution. In recent years, scientists across the world have honed what is called “extreme event attribution” science, meaning they are able to assess how human-caused climate change affects the likelihood and intensity of individual extreme weather events, in quantitative terms.

The World Weather Attribution initiative—a collaboration of scientists at Oxford, the Royal Netherlands Meteorological Institute, Princeton, and elsewhere—provides assessments in real-time as extreme weather events unfold across the globe, which journalists can cite to help audiences understand how climate change is playing out. The fidelity of the assessments improves with time, and in a storm’s aftermath, WWA reports can help journalists explain the effects of climate change in great detail. Here, for example, is the group’s report on the Australian wildfires in early 2020, in which fires were shown to be at least four times more likely due to climate change, and the European heatwave in mid-2019, in which scientists concluded that the heat would have been all but impossible without climate change. (Unfortunately, because these estimates rely heavily on supercomputers, experts in this field are unlikely to be local to you; local climatologists will be familiar with this work, however, and perhaps can frame the assessments for your audience.)

Coastal flooding. As the world warms, land ice and ice shelves melt, with their water flowing into the global oceans. At the same time, the volume of the water itself expands when warmed. These two elements contribute to sea level rise. Globally, sea levels have risen about 7 inches since the beginning of the 20th century. This heightened level of water is increasing the number of coastal floods during regular high tides and during coastal storms, whether those storms are tropical systems or non-tropical systems such as Nor’easters. View Climate Central’s ‘Coastal Flooding’ Toolkit.

Drought. The link between climate change and drought conditions related to precipitation is still uncertain, but what is certain is that climate change makes droughts worse through its effects on temperatures. As temperatures continue to climb from increasing greenhouse gas emissions, evaporation rates also increase. The higher evaporation rates dry out land surfaces faster, making droughts worse. A dry ground also heats up more easily than a moist ground, making the area affected by drought even hotter. View Climate Central’s ‘Drought’ Toolkit.

Extreme heat. The increase in extreme heat is a direct result of a warming planet. … What was once considered a rare, exceptionally hot day is now becoming more common. Heat waves are getting hotter and longer and record high temperatures are outpacing record low temperatures. View Climate Central’s ‘Extreme Heat’ Toolkit.

Heavy Rain & Flooding. More heavy rain is one of the hallmark signs of climate change. As the atmosphere warms, more water evaporates from soils, plants, lakes, and oceans. For every additional 1°F of warming, the atmosphere is capable of holding an additional 4 percent of water vapor. So when this additional water vapor condenses into precipitation, it leads to heavier rain—or when cold enough, heavier snow. View Climate Central’s ‘Heavy Rain & Flooding’ Toolkit.

Hurricanes & Tropical Weather. Tropical cyclones, the more general term for hurricanes and tropical storms, get their energy from the warm ocean water. 90 percent of the additional heat entering the Earth is going into the oceans, and some regions of the ocean are now 3-4°F warmer compared to the start of the 20th century. While the number of tropical storms and hurricanes (also known as typhoons or cyclones in other ocean basins around the world) is not necessarily increasing, the ones that do form can become more destructive due to the higher water temperature. Early research also suggests that warming water may lead to more rapid intensification of hurricanes. View Climate Central’s ‘Tropical Weather’ Toolkit.

Severe weather, incl. thunderstorms and tornadoes. A warming world provides more energy for these severe local storms because of a warmer, more moist environment. While it’s still unclear how exactly climate change is impacting tornadoes … [the] long-term tornado record indicates that there has been an increasing variability in the number of tornadoes from year to year in the United States, with an overall trend toward fewer days with tornadoes per year but more tornadoes on the days in which they do occur (outbreak days). View Climate Central’s ‘Severe Weather’ Toolkit.

Snow & Ice. Even in a warming world, there will still be snow. But the amount of snow and when it falls is already changing. Snow cover across the Northern Hemisphere and North America are both declining, on average, with the decreases most pronounced in spring and fall. However, snow may be heavier in places where it is still cold enough to snow since a warming world also comes with more evaporation, leading to more intense precipitation. View Climate Central’s ‘Snow & Ice’ Toolkit.

Wildfires. Dry winters, early-onset springs, and drier soil stresses forests and turns trees into kindling for wildfires. The annual average wildfire season in the Western U.S. is 105 days longer, burns six times as many acres, and has three times as many large fires (more than 1,000 acres) than it did in the 1970s. Climate change is expected to continue increasing temperatures and reduce moisture across the West, in part by causing a smaller and faster melting snowpack. These changes will further precondition Western landscapes for more, and more intense, wildfires. View Climate Central’s ‘Wildfires’ Toolkit.